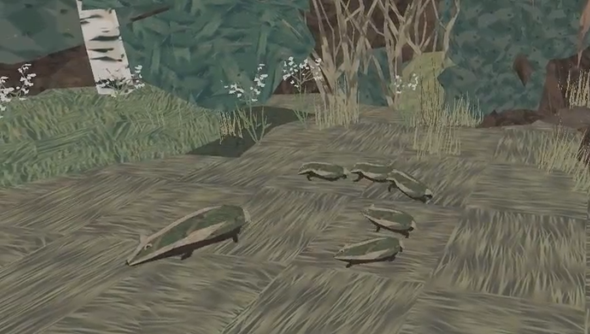 Continuing to dispel the myth that all indie games are 2D pixel art platformers, Might and Delight, developer of Pid (a, er, 2.5D platformer), have revealed that their next game, Shelter, will put you in control of a mother badger who must guide her cubs to safety through a dangerous wilderness.

Looks like someone’s art department has been drinking from the Proteus juice.

“As the mother of a litter of cubs you are forced out from familiar and safe surroundings to find new shelter in a beautiful, but dangerous world,” reads Shelter’s Greenlight page. “The harsh reality of nature plays a pivotal role in the game whilst at the same time Shelter aims to pay a homage to the great outdoors and all its imposing beauty.”

Beyond that details are sparse: it’s a single player, third person adventure game. From the sound of that eagle squark at the end of the video I’d guess you’ll be moving your cubs from shelter to shelter avoiding natural predators and, I’d imagine, that in the latter parts of the game you come across nature’s most evil creation: man.

Shelter’s currently aiming for a release at the far end of summer this year.