You begin Sir, You Are Being Hunted in a tad of a predicament. Your experimental teleporter has failed, landing you on an archipelago populated by parties of murderous gentrified robots who are partial to a bit of the old Sunday afternoon blood sports.

You’ll have to be resourceful if you’re going to collect all the machine parts necessary to make your escape. As I found from my recent playthrough, more resourceful perhaps than the game currently allows.

You start Sir with nothing. No food, no bandages, no weapons. Not even a map or a box of matches. Except for a radio to your butler back home, who’s unable to offer any material aid, you’re alone. You’ll need to search the islands for the 25 parts needed to rebuild your steampunk teleporter and bring them back to the standing stones at the center of the starting island. No mean feat.

First thing to do is search the remains of the fried robot unfortunate enough to be standing next to where you teleported in. You should find some vittles, rags for wrapping wounds, and a pair of binoculars. The presence of these three items is no accident, developer Big Robot are placing a priority on non-violent survival. In Sir, you should avoid a fight if you can help it, more often than not the risks outweigh the rewards. The binoculars encourage you to make watchful advances over the landscape, vittles are used to keep your strength up – lost health can only be recovered when you’re well fed -, and bandages because you won’t be stopping a gunshot bleed with willpower alone.

Essentially, you start Sir on the back foot.

This is a good thing. 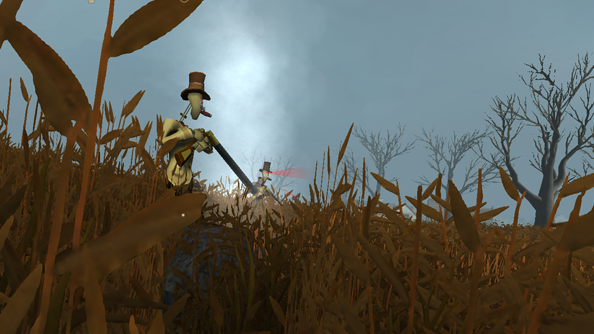 The weight of the word ‘Hunted’ in the title becomes clear in the first hour of the game. I spent it crawling through wheat fields and working my way past patrols of top hat-wearing robots, hiding from their view behind low loose-stone walls. It’s hard not to love their jaunty animations. The steampunk machines are meant to be piston-powered and the pop and judder of their staccato walk makes them seem playful. Then they empty both barrels of their shotgun into you.

You’ll be trying to find abandoned cottages and shacks, searching them for anything useful. The scarcity of items is a real concern because if you don’t find food you will starve and, because teleporter parts take up such a large chunk of your inventory, you will often be forced to discard wholesome food to further your escape plans.

Buildings are likely to hold more food and bandages: traps, if you’re lucky and, if you’re favoured by some deity, maybe even a rifle. The weapons I’ve come across so far range from useful (a single shot rifle) to an itemised false sense of security (a rusty axe). While the rifle is effective at taking out your hunters – it’s not too accurate and requires reloading after each shot, but does take your foe down in one or two hits – using it will leave you in more hot water than when you began: its shot rings out across most the island and will bring down parties of hunters on you faster than you can say “Sir Rupert Merryweather Rothschild-Vanderbilt III”.

Even with the that risk considered, getting a headshot on one of the robots in Sir rewards you with a puff of smoke and a top hat tumbling into the air.

Then the other robots empty both barrels of their shotguns into you. 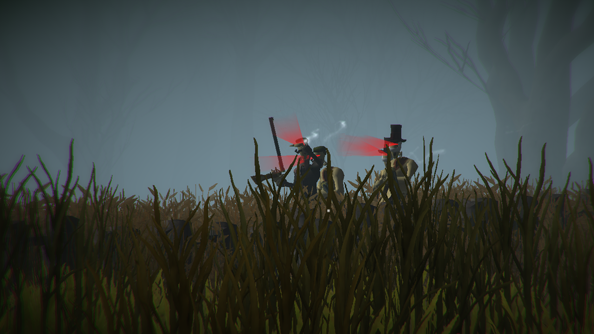 No, you’re much better off trying to remain out of sight, and it’s here that some of the limitations of the preview build I was playing cropped up. While avoiding patrols is perfectly possible, facing gentry guarding a piece of teleporter are more problematic. In theory you can distract them away from their post by throwing stones or bottles but I’ve not yet managed to do so successfully. They’ll look towards the sound, maybe walk to its location if it’s near them, but it’s never enough to give me a chance to get up to the device without gaining their attention. My only successes have been when the piece is in long grass. In those instances I can crawl right up to it and snag it, even if there are robots standing right next to me.

Another problem I came across are the dogs. Damn those dogs. They’re not finished yet but their current presence in the game is worrying. They’re ridiculously sensitive to your movements and will bound across fields to chase you down. Once caught, they pin you to the ground and bark for other robots to come fill you with pellets. I couldn’t find a way around the canine machines; they could sense me when I was hidden from their masters and they could come bounding over a hill, having tracked me from well out of my own sight range. It’s things like this that remind me Sir is very much still in alpha. 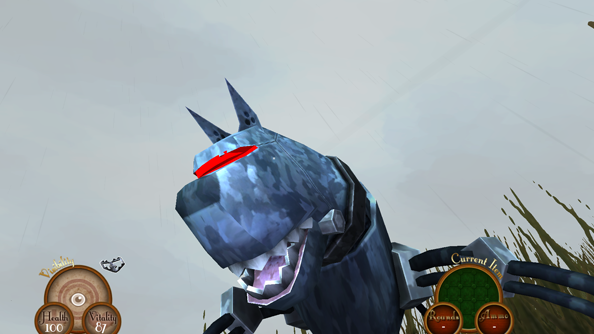 Even so, Sir is an uninterrupted joy to play, tapping into a primal sense of horror thanks to its unscripted nature. In most horror games a repeat play means the scares always happen in the same places and for the same concoction of reasons. The small freedom you have allows slight changes to the situation — you might enter a room through a different door or have a different set of unlocked skills — but the scares are carefully staged and they repeat with every playthrough. I find midnight walks in a dark wood worse than any of the jumps in Amnesia, or a night alone in a big house more terrifying than anything the Resident Evil games can muster, simply because those events are off script, there’s no preordained attacker or escape route. Sir, You Are Being Hunted hits that same fear of the unknown far better than any scripted horror game. Being hunted is horrific. It keeps you on edge. It’s all pitted against you.

At one point I was crouched in tall grass, watching the field ahead of me. On the far side were the standing stones where I needed to drop off the teleporter parts. I had two in my inventory and they’d been hard to get, I’d had to kill to machines and nab the pieces before any parties caught me in the act. Of course, as I can only save at the standing stones, death now would mean I’d have to do it all again. 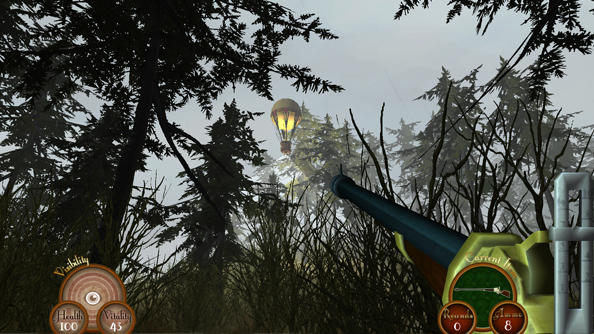 Between me and the standing stones was a party of four robots, marching almost directly at me. They’d walk right by if I waited where I was but behind me was a hot air balloon floating my way. On board are two robots, one with a rifle, the other illuminating the shadowed ground with a giant spotlight. If I stayed where I was, the hot air balloon would spot me and draw in the hunting party. I had to crawl on my belly towards the hunting party, trying to take a parallel line so as not to get too close and still get to the standing stones. I couldn’t go too fast because I’d be seen by the robots on the ground, nor could I go too slow because I’d be caught up by the robots in the air.

The whole event emerged unscripted from the game, it was simply an (unfortunate) alignment of events. It was the most tense and exciting moment I’ve had in a game in months.

It helps the game’s tone immensely that it looks like something out of a: the landscape is all trees stripped of leaves by winter, the drab browns and greys of the fens, low, rough stone walls, and harsh British sunlight. With a compressed day-night cycle it means you’re frequently treated to the sight of long shadows, a cold low sun, and the silhouettes of robots stalking the countryside. It’s up there with Dear Esther for managing to capture some of Britain’s bleakest terrains, a perfect backdrop for a manhunt.