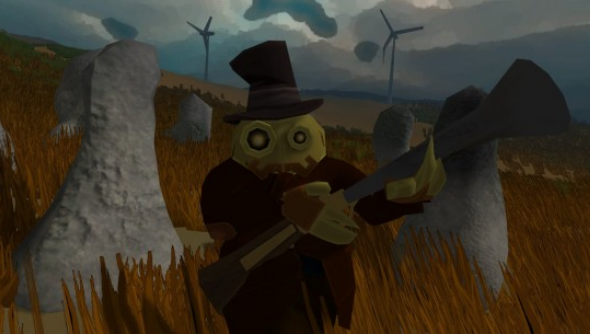 If Sir, You are Being Hunted wasn’t darn frightening enough with all its tweed-wearing, pipe-smoking androids strutting about everywhere, there’s now a new fellow here to ruin your day. The Poacher, with his squat posture and bloody massive blunderbuss, has joined the hunt for humans.

The December update brings a massive new set of options, first of which you’ll notice as you boot up the game. Creating a new world will now offer various starting positions, as well as different load outs to make your early game as easy or as challenging as you’d like.

Soon enough that damn Poacher will turn up, who can cause massive damage with the blunderbuss. Of course if you shoot him enough you can nick that for yourself, and unload on some other unsuspecting robots for close-up devastation. The blunderbuss ammo is very scarce though, so be mindful how you go about using it.

The axe has had some tweaks, resulting in a massively powerful head-severing tool. Developer Jim Rossignol notes that the axe may now be just a bit too powerful, so don’t be surprised if it’s nerfed in a future update.

Finally, if you’re looking to avoid confrontation some handy new features for the alarm clock are here to help you out. You can now set a timer – up to one minute – allowing you extra versatility on when the bells will ring out and have robots flooding towards the clock’s location. Perfect for ambushes or just plain old getaways.