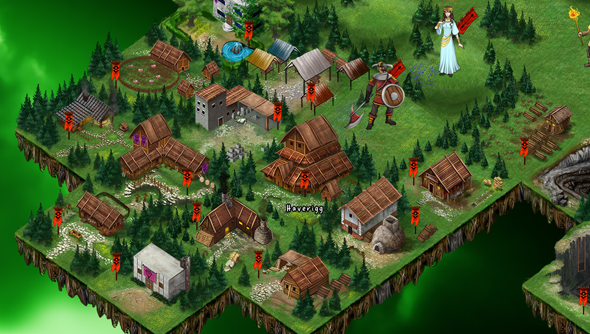 Skyward Collapse posits you as a creator god who must keep two tribes alive until the timer runs out. Coming between you and your goal are mythical beasts, plagues, serial killers, and good old fashioned warfare.

You must provide units to both sides of the conflict, aiming to balance out their armies so that neither can claim victory over the other. This would be easy if you were able to place equally-matched units for both sides. However, often you’ll be placing a unit for one side which has tactical advantage over the units on the other, leading to you frantically bulking out the numbers on the tactically disadvantaged side. Now, you’ve created a vast army that can wipe out the side with the over-powered units. Well done.

On top of that, you also have to contend with plagues and other such death-happenings that will weaken either tribe, threatening victory to the other.

Another aspect to the game to complicate matters are the 16 gods you can place on the board – each god has passive and active powers and acts independently of you. So, while they may be of some help at getting a losing tribe out of a sticky situation they will often also put the tribes into one.

Arcen have put together a great comic series to explain the core concept of the game with pictures and jokes.

And, you can see it all at work in this here trailer:

You can pick up a copy through Steam or fromArcen’s website. It’s only £4, too.