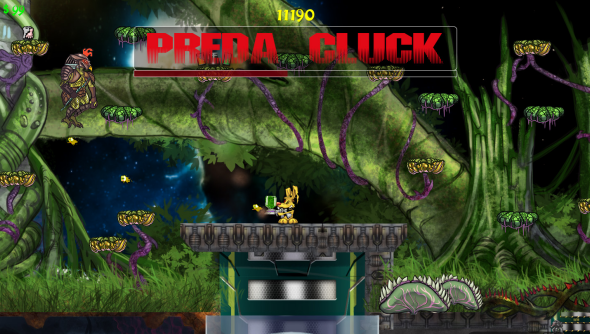 I can’t believe it’s the weekend already. Another Saturday has crept up on me all too quickly and I sometimes wonder if another day of the week steps out of the way to make it arrive sooner. It’s probably Monday’s fault, since that always seems to turn up before I expect it to.

Anyway! You know what that means, don’t you? I’m shining our Spotlight on Greenlight once again, making indie games dance for me under its unflinching argon stare. “Pirouette for me!” I leer, “give me a whirl!” But the games aren’t having any of it. They’re young and strong and proud. They step off the stage and beat me to a pulp.

Toxic Bunny comes at me first and it hits hard. It’s a platform shooter with attitude, action and angry lagomorphs. A fierce game with power-ups like hamster launchers, triple-strength espressos and anchors(?), it’s quite happy to inflict these upon me in the name of cartoon violence. For those who need to step back from the carnage occasionally, Toxic Bunny also features a collection of “in-game games.”

Up next, this fellow makes short work of me, for not only does Cannon Brawl feature cannons, it also has laser turrets and zeppelins to show off. Yeah, I don’t stand a chance against anything this stylish and sophisticated. It’s like a real-time version of Worms and it’s all about precisely angling shots to blow stuff to bits, each level gradually disintegrating under a barrage of fire. Cannon Brawl doesn’t yet have online multiplayer, but the developers say it’s on the way.

It looks like I understimated this game, too, and as I try to stand up I find myself floored once more, surprised at what looks like it could be a very original take on the increasingly popular genre that is block-based gaming. This one’s a zombie survival RPG where, in addition to building defensive structures as you try to protect a magic crystal, you’ll also be levelling up your stats. The strange thing is, the world around you will constantly be changing as it’s made up of great cubes that simply rotate the old terrain out of existence and bring up an entirely new slice of land. I was knocked sideways by this.

The next thing I know, FOTONICA is coming straight for me and before I can make some sassy comment about indie games with ALL CAPS titles it’s already silenced me. Man, this game is fast. It’s a first-person platformer that might remind you a little of Mirror’s Edge, except I don’t remember Mirror’s Edge being so damn quick. It’s at this point I start to regret belittling these indie games in my role as the spotlight operator. FOTONICA has a great wireframe style that reminds me of games I played when I was very, very young and I realise the error of my ways. I tell it and all the other indie games that I’m very, very sorry. I just wanted to have a little fun. Can’t we all get along?

The story has a happy ending because I was able to make friends with the very sweet puzzle platformer that is Home Sheep Home 2. Games like this aren’t always my cup of tea, but the animation in this is excellent (yes, that’s Aardman) and it has bucketloads of character. Yes, I appreciate that being an Aardman title means it’s not an indie game the same way that the work of a bedroom developer is, but c’mon, don’t you want to see something like this on Steam, maybe a for families to enjoy together in the evening? Isn’t it just lovely? Isn’t it? It’s not fair that only iOS devices get to enjoy it.