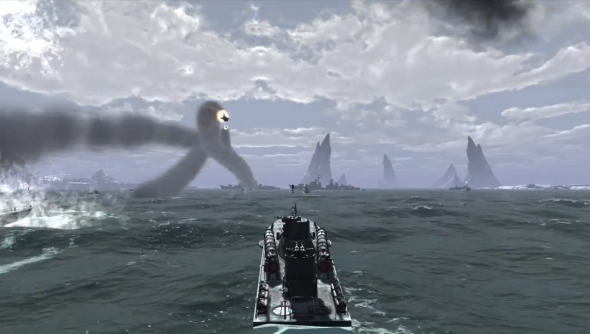 Ah, Saturday, my old nemesis. You have returned again and I see that, this time, you have come prepared to finish me, once and for all. What’s that you say? The only way I can defend myself is by collecting together five of the most interesting indie projects on Steam Greenlight? Well then, old friend, old pal, you’re in for quite the surprise. Just look at what I found this week.

SeaCraft is definitely my favourite Greenlight game this week. It’s a naval combat simulator set in the latter half of the 20th Century and so it’s focus is less on big, blustering battleships and more on maneuverability and missiles. There’s also a little bit of nostalgia going on here, as watching a gunboat dash about reminds me of a game I used to play in the late 80s called PT-109, which put the player at the controls of the torpedo boat once commanded by John F. Kennedy. Being a tiny ship running amok amongst larger ones, launching torpedoes and gunning down enemy fighters, was brilliant. Even if you had to do it with CGA graphics.

(Prepare yourself for some cheesy rock music, mind.)

I don’t even try to find these ALL CAPS games, they just come to me. ARKADIANAX is a proper, proper old-school style, vertical-scrolling shoot ’em up, but it takes advantage of the PC’s capacity for gorgeous graphics and has us flying through a whole series of colourful and cleverly designed worlds. In fact, after a game of ARKADIANAX you may suffer from colour overdose and have to go away and lie down. For a week. Then, I imagine, you might well want to get up and do it all again.

Now this is just cruel. Point Perfect is a game about being nothing more than a mouse pointer, but playing as that mouse pointer you must avoid enemies and obstacles while doing your best to draw boxes around anything that you want to destroy. Sounds easy, does it? No? It doesn’t look easy. It probably isn’t easy. I can imagine playing this for about six seconds before my frustration bubbles over, or I burst like an overinflated tyre. That said, many of my colleagues already think I’m an overinflated tyre. They may be right. Anyway, check out Point Perfect’s trailer. It’s one of the best I’ve seen in a while.

Drakensang – The River of Time

This isn’t the first Drakensang game, nor is it publisher dtp entertainment’s first attempt to get one of their titles onto Steam, but it may well be the first time you’ve heard of either. The Drakensang series of roleplaying games have been going for a while and have been fairly popular on the continent, but we’ve only brushed over them here in the UK. They’re traditional and fairly heavy-going games that are all about stats and party management, meaning they may not be the most accessible titles out there, but they do appeal to hardcore roleplayers. The River of Time didn’t exactly look cutting edge when it came out two years ago and now it looks even rougher, but the appeal of these games is in their systems and their stats. And, of course, this is Steam Greenlight, so we all love anything old-school here.

(Okay, I need to stop saying “old-school.” Quick, find me something silly.)

Ah, what a perfect way to round off this roundup. Crashtastic is a game about making things and then smashing those things together. Fans of some of the more obscure PC games out there might remember Stair Dismount (aka Porrasturvat) from many years back, a game that was about nothing more than pushing some poor fellow down some stairs. Crashtastic has a little more to it than that, with 22 challenge levels tasking you to build things that will pass various tests but, let’s be honest, this is mostly just a sandbox for smashing. It’s almost a virtual Lego kit where someone else cleans up the mess and it looks like a lot of harmless fun to me.