Remember how shooters used to be in vogue or how, once upon a time, we couldn’t move for flight sims? Now, we live in the age of the sandbox, the pixel playground. Planet Explorers is another game jostling for space amongst this ever more crowded scene, but this time around it isn’t all about blocks. Or, I should say, it isn’t so blatantly about blocks as there’s quite a lot more going on.

Planet Explorers is still a game about construction, about building things piece by piece using materials you’ve mined, harvested or scavenged from your environment, but it’s not as Lego-like as many of its peers. There’s much less of a Minecraft influence here and everything is certainly a lot less square, something that very much suits the alien and often uncomfortably organic world that you’ll find yourself in

But let me come back to the construction in a moment. First, I need to give you a comfortable grounding in the premise of the game, a safe landing, if you will. 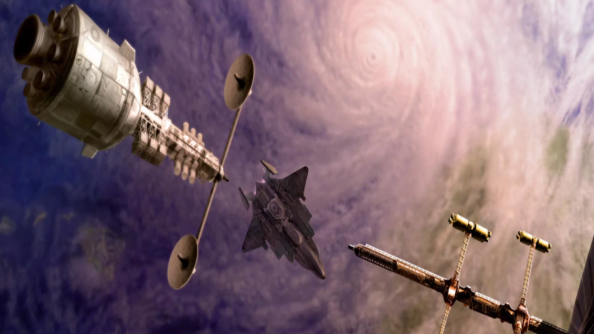 Unfortunately, safe landing is exactly what you won’t enjoy as Planet Explorers begins. While the game has a free-form construction mode and also an “Adventure” mode (which is similar but which gives you set objectives to achieve), the main game is a plot-driven experience that dumps you on a hostile alien world. The colony ship you were travelling abroad is involved in a mysterious crash and suddenly a handful of survivors must make the best of the strange planet that has become their new home.

As you take your first steps on this new world, your first impressions won’t be of a game based around construction or sandbox play, but of something much closer to an MMO. Static NPCs wait patiently with stark exclamation points above their head and you quickly find yourself engaging in fetch quests, searching for characters or collecting X amounts of a resource to satisfy some slightly abstract command. It would be great to have company at this early stage of the game, but multiplayer is still on developer Pathea Games’ to-do list. 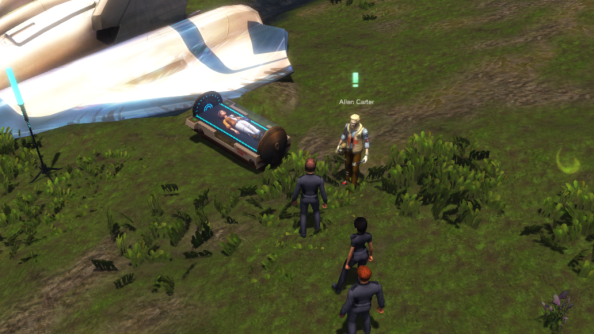 Bear with the game a while, gather a few resources and you’ll soon have the opportunity for a little construction, throwing up rudimentary wooden shacks or crafting simple tools to make your life as an off-world settler much easier. Planet Explorers uses the ever-popular Unity engine and while your construction icon might be a floating green cube that immediately suggests blocky, angular buildings, there’s plenty of scope for you to make your creations both smoother and, if you want, curvier. The one downside to this is that, at the moment, textures tend to blend together and when you plonk down metal blocks to shape a new building you can end up with a sort of homogenous, semi-organic base to your structure. This can give the impression that your iron fort is growing out of the ground and that you’ve morphed the environment rather than actually built upon it.

Still, it’s a welcome change to the the great quantity of Minecraft-inspired games out there and it fits with the unusual scenery that you’ll be exploring. Planet Explorers isn’t all about randomly-generated terrain, instead featuring carefully-designed environmental features that include mountains, caves and canyons, making for what is often a more coherent world. It’s absolutely packed with weird creatures too, most of which just seem to want to kill and eat you, though not necessarily in that order. 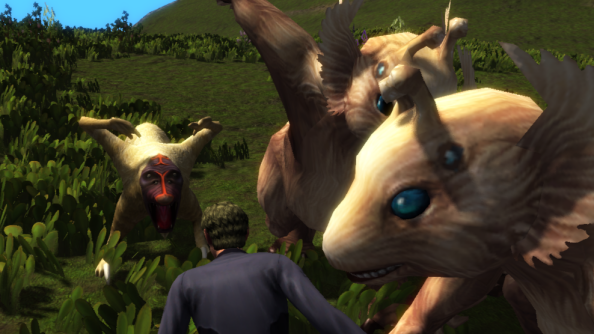 Unfortunately, combat’s currently pretty ropey and I spent a lot of time punching thin air, though forming a party alleviates this somewhat, since whoever you take with you inevitably proves to be a far more effective pugilist and this leaves you free to concentrate on other things instead.

The game’s only at version 0.52 right now and there’s lots that needs work, from the character creation options to the animation to the cheesy lift music, and it urgently needs multiplayer, from which I think it will benefit greatly. Nevertheless, it already gives you plenty to play with this alpha is completely free to try. It also has a lot of potential for expansion and I’ve tried to use the in-game designer create a few custom items but, I have to admit, I don’t quite have the skills to convincingly pull that sort of thing off. With a bit more practice I hope to be building my own assault course soon and then wooshing around it in my own custom-designed. Oh yes, there are vehicles too, as well as weapons and turrets (which you’ll find very useful indeed on such a packed, hostile planet).