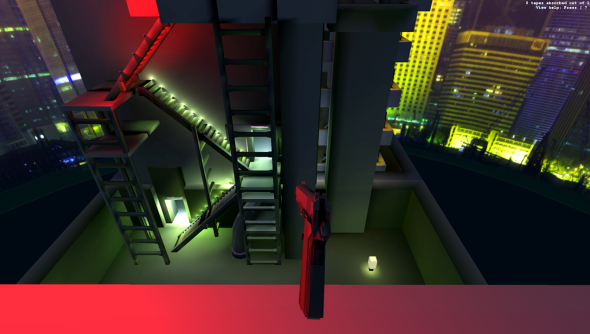 Welcome to an extra special Spotlight on Greenlight celebrating this holiday
season. This week I’ve had a good rummage around inside the Greenlight
sack and pulled forth twelve titles, old and new, to celebrate the


Twelve Days of Christmas. Some of these games have been on Greenlight
since the summer and, I’m sad to say, may have long been forgotten, though they never deserved to be. Every game in this roundup is well worth your looking at and, I believe, voting for on Greenlight. Every game except one, anyway…

To make sure we never forget any game again, old or new,
I’ve come up with a mnemonic that we can all join in with. I’ve decided
to associate each title in this week’s Spotlight with something
Christmassy. Isn’t that exciting? It’s like a kind of game! …Right?

I’m
surprised by just how many people still haven’t heard the story of
Receiver. The game was conceived as part of a seven day challenge to
make a first-person shooter, but it’s since had a life way beyond that
week-long game jam.

Receiver is a smart, polished and very difficult. It
simulates your gun in much more detail than you’d usually expect,
allowing you to play with the slider, pull out the magazine to inspect
it, or even reload bullets one by one. It’s a first-person roguelike,
letting you loose in randomly-generated levels populated by deadly
turrets and vicious drones, following the roguelike tradition by
ensuring that all death is permanent. I should add that, while it isn’t yet on Steam, it’s been available to buy online for ages from the developer’s site.

If Receiver were something Christmassy, it would likely be the tinsel: bright, crisp, shiny and coming in all shapes and sizes.

Captain Morgane and The Golden Turtle

I’m
sure there’s at least a whiff of Monkey Island among the warm, spicy
aroma I get from this game. Featuring the talents of Broken Sword writer
Steve Ince, Captain Morgane mixes point and click adventuring with a
touch of open world exploration, taking players on a journey a-pirating
across the high seas. The characters may look a little over-animated,
but I think the art looks pretty darn impressive and the writer’s
pedigree means this is certainly one to keep an eye on.

Sat steaming in the middle of the dining table and smelling slightly of rum, Captain Morgane and the Golden Turtle is definitely a warm Christmas pudding.

This
has definitely got to be one of the most colourful games in this week’s
roundup. SCHAR is a top-down space action game where you get to modify
and upgrade your ship between battles. There are swarms of enemies to
beat back and, should this all prove too much, you can invite friends to
the fight and enjoy some four-player co-op.

Like many of its indie peers on Greenlight, SCHAR can also be bought directly from its developer via their website. Until Christmas Eve, the game is available on a Pay What You Want deal, which is certainly an expression of seasonal goodwill.

This
Christmas, SCHAR’s vibrant colours represent a line of fairy lights,
drawn up across the window, winking kindly at passers by.

This
is another adventure game that again shows off some very fine art and
can also boast a veteran writer amongst its roster. Author Jane Jensen
was the pen behind Gabriel Knight 3 and here she’s composed a story of
strange mysteries and supernatural secrets. Gray Matter gives you two
playable characters to take through an eight-part gothic story which
promises magic tricks as a “gameplay element.” Fascinating, I’m sure.

Without
doubt, Gray Matter is the stocking you find at the end of your bed in
the morning. It’s packed full of mysteries, including how it even came to get there.

My
first thoughts when I saw this were of Cthulhu Saves the World and
Breath of Death VII, two indie games created in the 16-bit style and
inspired by the console RPGs of the 90s. I wasn’t quite on the money,
though, as when it comes time for a fight, Anodyne’s combat means it’s
much closer to Zelda.

I
never played many games like this when I was younger, but I can tell
you that I’ve sunk many, many hours into the similarly inspired The Binding of Isaac and I’d be
very interested in something that married that sort of action with
Anodyne’s exploration through a beautifully-pixellated dreamscape.

Anodyne’s
retro charm and slightly abstract concepts mean it’s your kindly grandfather,
sat by the fire and telling you stories of his youth.

War for the Overworld

A
modern take on the Bullfrog classic Dungeon Keeper, this is a real-time
fantasy strategy game with an emphasis on base building, although it
might be better to call that base a lair.
Carving out your underground real-estate, you’ll create and fortify a
dungeon that meddling do-gooders will do their best to try and conquer.
As your minions fight off the invaders, you can even take direct control
of one of them and join the battle.

War for the Overworld is currently on Kickstarter too, and whether or not this crowdfunding attempt succeeds, its developers are still pushing for it to be included on Steam.

Impish and exciting, War for the Overworld is the new toy that you always wanted, quietly waiting for you under the tree.

This is something I feel terrible for not having noticed earlier and it’s been on Greenlight for four months now. Tsk, Paul.

Signal
Ops is a first-person game of multiple perspectives, giving you the
chance to see through the eyes of several special agents at once and
demanding you demonstrate skill in stealth, shooting and strategy. Your
missions will demand sabotage, theft of secret documents and, of course,
good old assassination. If you have one or even two friends (that many?!), you can invite them along to join the action.

I
think we all recognise what Signal Ops represents straight away: it’s
that inevitable Christmas showing of The Great Escape. Maybe this time
Steve Martin will be able to jump the barbed wire?

Another
oldie, at least as far as Greenlight is concerned, The Real Texas’
blurb shows that the game has something in common with me: the underwear
is optional, but it’s default setting is on.

Now
that I’ve disturbed half our readership, let me get on and explain that
this is an isometric western RPG, but when I say western in this case I
don’t mean European or American. No, I mean wild western.
It’s set in a strange alternate dimension between worlds, a strange and
blocky place where every other person seems to need a cowboy’s help and
there are two kinds of chicken cutlets to collect. It also has an
excellent menu theme and a damn fine soundtrack.

Coy, funny, irreverent and slightly ridiculous, The Real Texas is the wine-fuelled game of charades you play after dinner.

I
don’t see very many hardcore strategy games on Greenlight, so it’s good
to be able to serve one up. Alea Jacta Est is a game of grand strategy
that covers five different periods of history, all of which pitched
Romans against Romans in civil wars across the Republic. It’s certainly
not light going and is more likely to appeal to the sorts of players
whose tastes tend toward the Europa Universalis and Crusader Kings
series. Or those who remember the Cambridge Latin Course.

Big,
heavy and possibly taking weeks to finish, Alea Jacta Est is the
Christmas cake. You’ll still be coming back to it in January.

Once
again I get a chance to bleat excitedly about random generation, as
that’s how the world of Cards and Kingdoms is made. Imagine a wilderness
populated by dangerous monsters, with you a young warrior fighting back
the hordes. As you kill these monsters, they drop cards that you can
play to boost your powers or to begin to build a kingdom in this
wilderness.

Gradually,
as both your abilities and your influence grow, you’ll expand your town
and your adventures will lead you toward rarer and ever more valuable
cards. I think this sort of procedural adventuring-meets-city building
sounds terribly exciting and I rather like the look of that day/night
cycle, too.

Sat on the table for all to enjoy, Cards and Kingdoms is a big box of sweets from which everyone will draw something different.

Just
to show you that not everything on Steam Greenlight is an example of
innovative design or retro charm, let me demonstrate Towing Simulator, a
game whose only ambition is to give you the chance to move illegally
parked vehicles. Your challenges include narrow roads and… I’m not
sure what else, actually. Reversing, I suppose. In this demonstration
video I’m fairly sure you can hear traffic that isn’t there, though I
admit this may just be a symptom of imminent madness, brought on by the
very concept of this game.

I’m afraid Towing Simulator might be the lump of coal you were always threatened with. You must really have misbehaved to deserve this.

But wait! Don’t hang your head, for I’ve saved what might well be the best for last…

Artemis
is fantastic, truly genius idea for a game, a multiplayer starship
simulator where every player takes the role of a bridge crew member,
each of them controlling a single station. The weapons officer gets to
shoot, the engineering officer distributes power to the ship’s systems
and the helm officer makes sure you’re all heading in the right
direction. Perhaps best of all, the ship’s captain gets no station at
all, and can only only watch the action on their screen, calling out
orders to their crew and attempting to keep a lid on the situation,
something that depends entirely upon their leadership skills.

Artemis
is played by a team sat in the same room together, PCs hooked up via a
LAN, something that makes each game an event and, admittedly,
requires a little organisation beforehand. It’s a very special thing and you should
absolutely watch this video of a lackadaisical and rather glib crew as they’re tossed into the heat of battle.

Artemis
is the spirit of Christmas itself: people making the time to come
together, to share, to surprise one another and to celebrate. Artemis is
the joy of people and the delight of play.