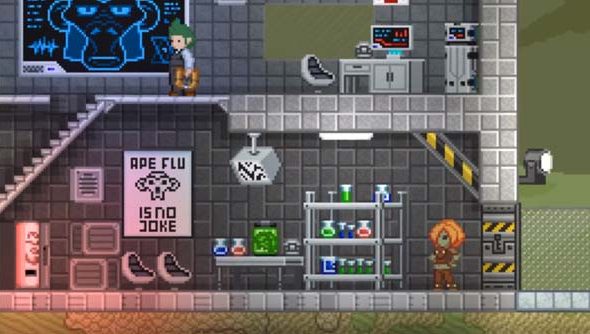 Terraria started life being called nothing but a 2D Minecraft, then it was released. It was compelling 2D sandbox world that was full of secrets and little bits of awesome like rocket boots and shark guns and gems and giant evil skulls and rocket boots, rocket boots, rocket boots. Then work on the game ceased. Chucklefish were moving onto something new, Starbound. It looked like much the same, nothing but Terraria in space. Well, this video shows there’s more going on under the hood, a lot more:

Look at the complexity of that final building. In Terraria the rooms always seemed so sparse and functional. These are warm and packed with things like posters and lab desks that build a scene. Plus, there’s wiring going on. I’ve been playing Prison Architect lately and I like to see wiring, lots of it.

Without simply quoting the about page verbatim I can’t convey quite how deep and… ah hell, just read this will you:

You discover a space station which is “sprawling and full of potential. Throughout your travels you’ll find ways to upgrade and repair it, restoring it to its former glory. You’ll need to find a crew, conduct research, catch rare creatures, and unlock its multitude of facilities. From a factory capable of producing mechs to labs where captured enemies can be studied and trained, the space station contains everything you need to explore the universe.”

“Planets in Starbound are entirely procedurally generated and filled to the brim with unique content. We went into the planet generation with one simple goal: no two planets should be the same. By procedurally generating even the smallest details, we’re doing just that. Not only is the terrain of the planet procedurally generated, but the weather, the gravity, the difficulty le”Exploring is wonderful, but everyone needs a place to call their own. That’s why we’re letting you claim an entire planet!When you claim a planet as your new homeworld, a whole new aspect of gameplay opens up. Everything that makes a planet unique is at your command. Feel like changing the weather? Build a weather centre! Don’t like the terrain? Terraform it! Every aspect of the planet is under your control. Once you’re happy with it, start populating it with characters you’ve met in your travels and take care of them! They’ll have needs and desires and won’t hesitate to ask for your help if they require assistance.”

In the day thatMaia gets Kickstarted, well, today’s been good for space.