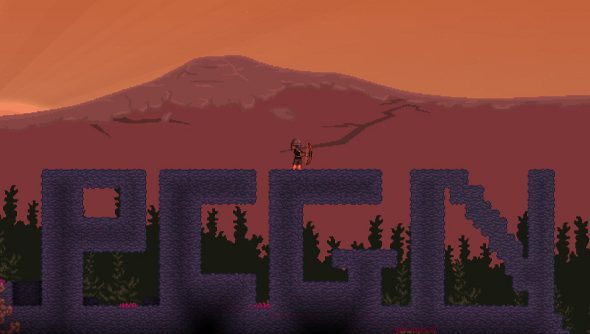 My first home in Starbound, Chucklefish’s exploration sandbox in space, was made of dirt. It got deathly cold at night, foul beasties kept clawing at the rickety wooden doors and I’m not sure that the furnace I installed was PAT tested. Such is the life of a rookie intergalactic explorer, making do with whatever’s on hand.

That house is gone now, blown to smithereens by an angry UFO. I don’t mind, because I now live in a gargantuan steel and glass monstrosity, where the shelves are lined with trophies from fallen foes and every wall is fitted with flashing, bleeping screens.

Nobody told me what I should be doing, so I decided to live out my dream of being a homeowner, which necessitated becoming a miner, warrior, builder and thief. Apparently it’s not a good idea to build a base on the first planet, but my goal is to craft vast structures on every world I visit. One day, people will discover them and ask “Who the hell would build this?” A robot called Beep Boop, that’s who.

Starbound shares no small amount of DNA with the likes of Minecraft and Terraria, giving players a randomly generated playground to muck around in, exploring, crafting, building and generally just setting their own goals. But this playground is mind-bogglingly huge, encompassing a whole galaxy filled with worlds waiting to be charted and explored. 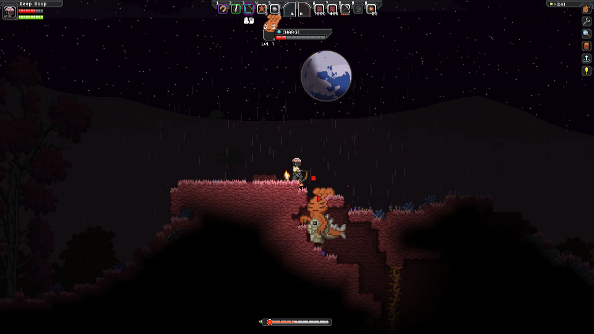 Each new game begins on a spaceship, and I found myself exiled from my robotic compatriots and orbiting a new, unexplored world. After teleporting down, I’m given some basic tutorials, but guidance is minimal and the real goal is just to discover everything through experimentation. My space explorer education has been organic one, where looking for simply necessities have lead to grand adventures.

My first weapon, a rusty sword, was crap and I was entirely absent armour, making my defense against ferocious alien monsters pitiful. Obviously I needed to craft some half-decent gear, but I didn’t even have crafting tools, so off I went on a mining expedition to uncover ore with which I could construct a crafting table, furnace and anvil, and then another expedition spawned out of that as I needed to hunt down materials for a new sword and shiny armour.

But simple mining expeditions rarely end in just finding a nice vein or iron or silver. In the depths of the alien planet there are ancient, long-forgotten catacombs, vast underground lakes and trap-laden dungeons. The surface may even be populated by villages complete with traders, or military installations filled with angry soldiers and advanced technology. All of these places can be mined and looted, transforming a simple hunt for ore into a sprawling Indiana Jones-meets-Star Trek adventure. 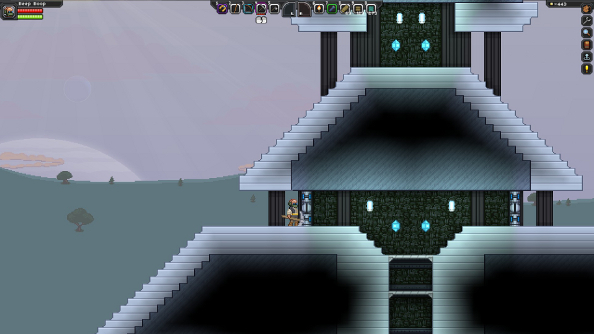 Construction, too, begins as a necessity. Rain, cold nights, and deadly aliens make a warm, defensible building a must, but you only need a basic structure for that. The more elaborate projects I’ve embarked upon came out of a love for building and experimentation. Who wants to stop at a plain wooden cabin when you can put together a massive outpost filled with sci-fi gadgets?

My first truly impressive construction project began with me playing the role of a thief. I uncovered an imposing alien base, with sterile white walls, giant glass ceilings and laboratories – it made my wee cabin seem positively primitive. So I did what any self-respecting homeowner would do: in a fit of jealousy I trashed the place, mined the walls for resources, chipped away at the floors, nicked chairs, tables, shelves and machines and then legged it.

I had two options after I’d escaped my angry pursuers: I could use my loot to build a lovely new home, or I could think of the future, and transform my dragon’s hoard into blueprints onboard my ship, allowing me to spend money to generate countless copies of all the fashionable furniture I’d pilfered.

My hunger for acquiring new items for my growing home had led me all over the galaxy. I visited a rustic village populated by medieval robots who feared my sentiency, a world populated by trees with eyeballs and a planet filled with giant brains. I looted a golden temple to a bird god, I fought an alien with phallic appendages on its head that spewed fire, murdered laser gun-toting mercenaries and drowned in a lake of acid. It’s been an exciting week. 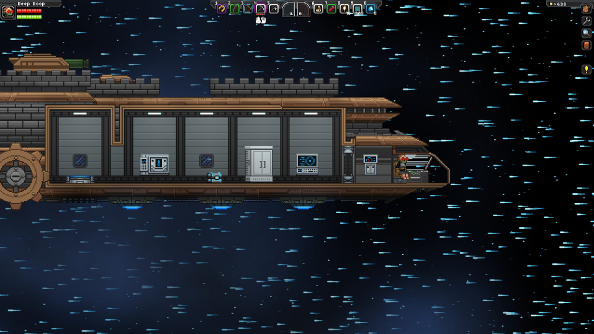 And while I’ve travelled far and wide, becoming a wanted robot on countless worlds and a hero on others (I say hero, but I usually just save towns from monsters that were originally chasing me, so I’ve really just been cleaning up my own messes), I’ve barely scraped the surface of Starbound. It manages to consistently surprise me, because there’s no way to predict what I’ll find when I go spelunking down a newly discovered crack in the earth, or what’s lurking in the ominous tower I’ve just bumped into – it might be a chivalrous knight or it might be a murderous gunslinger.

While I’ve spent most of my time playing on my lonesome, multiplayer is as easy to jump into as its offline sibling. You can take your own character to chums’ universes and play together, and share the coordinates of particularly mineral-rich worlds with absolutely anyone, allowing them to visit the planet in their own game.

Despite already being huge, there’s so much still to look forward to: from meteor showers and space combat, to player created mods. I’m excited for the future and eager for the promised story missions that will add a framework to the currently aimless adventure, yet I’m still content without those things. Now, I can’t stay here waxing on about Starbound all day, as I’ve decided to build Big Ben in the middle of a hostile desert and then shoot adorable, but carnivorous, bunny monsters from the top of it.