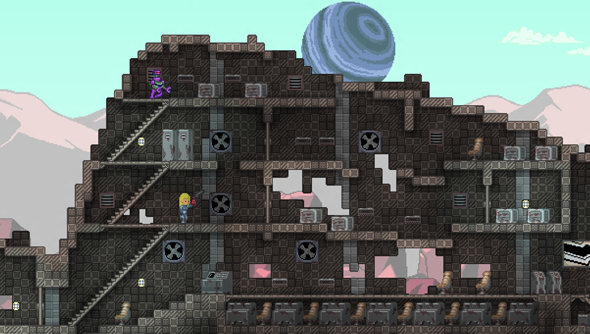 Starbound isn’t the same game it was a week and a half ago. Five updates have come and gone since the Terraria-alike entered open beta on December 4, and left Change with a capital ‘Chuh’ in their wake. They’ve variously eased entry into the game’s systems, rewritten its levelling system entirely, introduced a mass-scale rebalancing of every item, creature, armour type and weapon, and nerfed birds (they’d previously “follow you forever”, which wasn’t nearly so romantic as it sounded).

Yesterday brought what’s destined to be the most far-reaching tweak of all – the first seasonal twinklings of a comprehensive mod management system.

“It isn’t yet complete, but we are opening it up so mod authors can begin working and get their mods up online,” wrote Chucklefish on their site. “Please be patient with us as the download system is currently undergoing maintenance and you may need to try several times to get downloads to work.”

That issue will be seen to shortly, we’re told, and you’ll need just a forum account to access or join Starbound’s fledgling mod scene. Somewhat unbelievably, there are already 14 pages of community creations on the site – including Christmas adventures, the addition of The Elder Scrolls’ Argonians as a race, and the introduction of faeces as a throwing weapon. Also nudes, because that’s the first way you know a modding community exists.

Elsewhere in yesterday’s update, Chucklefish prepared their already astonishingly successful new game for Christmas (and did their part to tackle nudity, too, from the looks of things):

I know about half of PCGN has been absorbed sideways into Starbound like adventurers are into Slimes. Might we find you lot in there too?