Last week we reported on how Steam Early Access has started selling alpha builds of games, giving customers the opportunity to buy into the development versions of games like Prison Architect and Arma 3, as well as granting them the full game upon release. You can read plenty elsewhere about the completed games that are available on Steam, but very little has been written about what you get if you pay up for early access. We’d like to change that and we’re going to take a close look at some of the more popular early access games over the next few weeks. This is a little bit of an experiment for us and we’re not entirely sure if it’s going to work, so we’d appreciate your feedback in the comments.

StarForge, currently in Steam’s best-seller’s list, is a good place to start. It’s a scifi game of sandbox construction across procedurally-generated worlds and its ambition is to let players “Dig an endless tunnel, fly out to the far reaches of space, and come back again.” That’s some pretty impressive scope and it helped to win StarForge over $135,000 on crowdfunding site IndieGoGo.

Now, for fifteen of your earth pounds, you can start StarForging right away, though naturally any alpha version of a game is going to be at least somewhat limited in what it can offer. As of it’s introduction to Steam, StarForge is at version 0.3.5. The important question to ask is: what do you get for your money?

Throbbing away inside StarForge is the Unity Engine and when you first set foot on an alien world you might find you’re cooing softly to yourself. Though StarForge doesn’t quite look spectacular (some of its textures are very raw), it does look pretty good and, thanks to some bloom and lens flare, also very bright. A quick glance up to the heavens shows planets turning and what appear to be asteroids in low orbit. 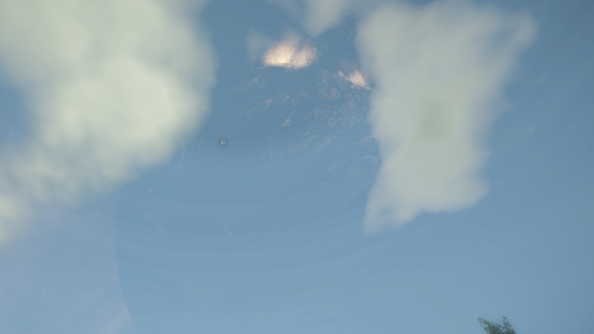 Right now, there’s two of those alien environments to plant your feet upon, each of which has a game mode associated with it. The first is a verdant valley where the sun always shines and where no extraterrestrial life comes to interrupt your sandbox play. The second is a wide, flat desert where horrid, red, bulging giant larvae scurry towards a clone vat that you must protect by throwing up hastily improvised defenses, making use of the pallets of raw materials that regularly spawn around you. The game offers both single player and multiplayer modes and though there’s no server browser yet, you can find a list of servers on the game’s official forums.

I’ll begin with that second game mode, which is essentially a rudimentary, first-person tower defence. Starting with a handful of supplies (the game includes timber, oil, stone and metal so far), you can craft great cubes of concrete, metal or wood which you then plop down, Minecraft-style, from your impossibly cavernous inventory. You don’t shape these yourself, but instead select from a menu of preset possibilities, the game telling you how much you can craft according to what supplies are nearby. If you don’t have enough, you can dash off into the desert to drag another pallet back, until you’re surrounded by all the paraphernalia that you need, a colonial magpie hoarding the most mundane of materials.

You can also build a selection of turrets which you’ll find invaluable for fighting back the horrors. Each new wave brings more and bigger creatures until you’re fighting monsters as big as houses and need multiple rocket launcher turrets to take them down. Occasionally, you’ll have time between repairing your defences to dash out into the desert and either collect another supply pallet or investigate one of the airdropped crates to find out what sort of weapon it might contain. You see, as well as building, StarForge has you shooting. 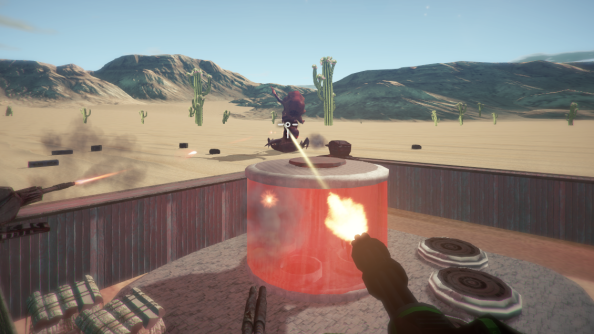 These weapons are procedurally-generated and come in all sorts of shapes and sizes: such as a minigun, a machine-gun with a chainsaw welded on or an assault rifle with… some unidentifiable attachment that seems to do nothing. In theory there are endless varieties of ridiculously over-engineered weapons available, but I found the same models started to repeat fairly quickly. I can’t say this bothered me very much, but what did bug me was how, whatever weapon I was firing, they all felt exactly the same.

For now, that’s about it. You and some friends can band together to stack up blocks of concrete and plonk rocket launchers on top of them over and over until, inevitably, an alien bug the size of a school comes and headbutts your base. The terrain is flat, the creatures come at you in straight lines and there isn’t much opportunity to create complex structures, devise tactics or really build anything that’s any more than a barrier. It’s all very rudimentary, but that’s fair enough because, of course, StarForge is in alpha.

Stepping into the sandbox mode, where the grass waves in the breeze and the trees lord over you, there’s no alien antagonists to get in the way and so you’re free to properly indulge your creativity. You can drop massive wooden blocks to your heart’s content, using your gun as a kind of rudimentary chainsaw to cut down nearby trees and harvest yet more wood until, at last, you’ve built your cuboid castle. Concrete will have to wait: at the moment, there’s no possibility to dig and so you can’t replenish your stores of stone. You’ll also experience a few other minor irritations such as block placement being a little tetchy, making it all too easy to drop a two meter square lump of concrete in the wrong place, and a lack of an option to invert the mouse. 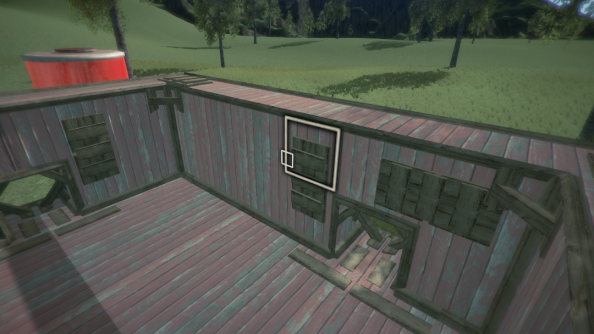 There’s also no way to deform the pre-generated terrain or craft any additional items, such as tools, windows, doors, or whatnot. There’s not yet any chance for alpha players to try out any vehicles and the game’s physics engine is, at present, not fully implemented. There’s also no save function yet, so no way to keep whatever giant wooden fort you’ve birthed. There is, however, the chance for you to build a giant column of wood so high that you begin to see the curvature of the planet, before falling to your death and enjoying the game’s ridiculous scream effects. While you’re up there, you’ll likely spot the limits of this map, which is only a few square kilometers and has no variety in its terrain beyond some humps. That is everything there is in the current version of the StarForge alpha. You might rummage in the manual for more. You won’t find anything.

Yes, StarForge is a work in progress, but it’s also clearly still at a very early stage of its development.

It’s not yet a game where you can build very much or do very much, certainly not most of the stuff that’s featured in the videos on StarForge’s Steam page. You’ll have to scroll to the bottom of that page for the comprehensive disclaimer that explains how your fifteen pounds isn’t yet getting you the chance to tunnel below ground, to reach into space, to procedurally generate landscape, to enjoy dynamic weather and to see the other forms of terrain that are displayed in the Steam store screenshots.

I well understand that and it’s not at all fair to criticise the game for being unfinished. That’s not my intention. But I would advise anyone thinking of putting down those fifteen pounds to keep their money in their pocket for the time being. Version 0.3.5 of StarForge is extremely thin and it best qualifies as a tech demo.