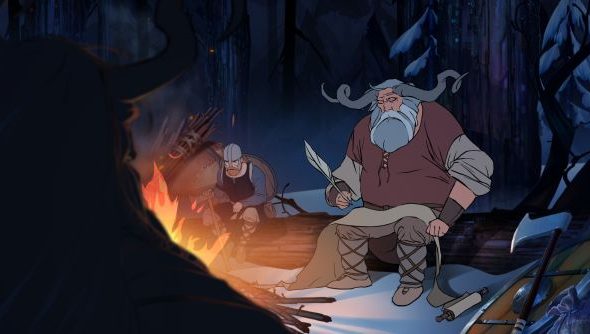 The Banner Saga was one of the top 10 best-selling games on Steam last week, thanks to a mid-week sale that reduced it to just over a tenner. In fact, since the release of its single player campaign in January, it’s done “really, really well”.

But when its indie trio left BioWare to start on their sobering viking RPG, in the days before Greenlight, they didn’t know they’d even make it onto Valve’s impassive grey storefront.

Stoic began work on The Banner Saga with the intention of making it a one-year project. They were burning through their own savings, and planned to finish the game “as quickly as possible” and “as lo-fi as necessary”.

“We figured, ‘Well, it’ll be cool, we’ll make it fun and there’ll be enough other people to like it that it’ll be good enough’,” explained Jorgensen. “Because when you only have three people, you only have to sell so many to be successful and so at that point if we couldn’t get on Steam – well, that would be unfortunate but we were willing to try and sell it ourselves or however was necessary.”

When Stoic opened initial talks with Valve, they were hopeful – a former colleague and friend worked for Valve, and “it was nice to have somebody to actually grab and talk to”. But nothing was certain until after The Banner Saga’s Kickstarter project succeeded in April 2012.

“This is before Greenlight existed and we did not know [The Banner Saga would get on Steam], because it’s totally up to Valve what happens on Steam,” said programmer John Watson.

“We started talking to them in January/February 2012 and they were open to the idea of being on there but it took so long,” added Jorgensen. “We weren’t actually turned on Steam until Summer of 2012.”

A couple of months later, Greenlight would change Steam forever – into a more open, less curated space. And The Banner Saga would go on to become a “compelling tapestry of epic conflicts with emotionally engaging characters”, as our Fraser put it. Have you played it yet?