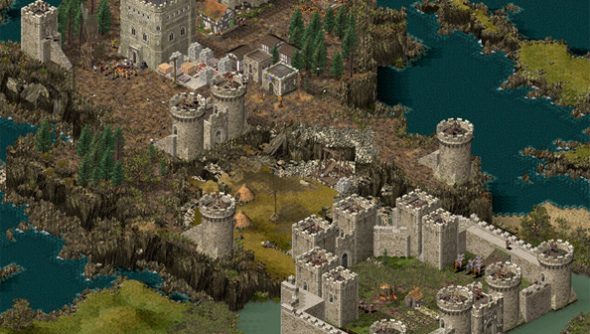 I never thought that GOG.com could be pronounced “Gog”, a la “frog”, but that’s how Nicholas Tannahill does it. He works for little PC mainstays Firefly, who are currently hard at work making their back catalogue of strategy/management games easier to look for our spoilt, modern eyes. And he says those high resolutions have done something funny to Stronghold.

“The game’s now available for the first time in high definition and it supports resolutions up to 2560×1600,” says Tannahill in the video below.

“Battlefield zoom is probably our favourite new feature. Because the game’s resolution can be set so high you can view the whole battlefield on one screen. You can zoom out and play the game live and have it happen in front of your eyes. So there’s no more of that scrolling around to see where your troops are, checking they’re not all dead. You can just look and it’s there.”

Stronghold HD includes both the original Stronghold and its extra-sharp version, as well as the Stronghold: Excalibur pack, the Super Castle Attack maker and its soundtrack for $4.79.

Stronghold remains to date the only game to capture the castle-lust of the British history taught in secondary schools. It’s all keeps, moats, palisades and pigs. Share your memories of the game below.

{"schema":{"page":{"content":{"headline":"Stronghold HD is out; has such high resolution that you can see all of the battlefield on one screen","type":"news","category":"stronghold-hd"},"user":{"loginstatus":false},"game":{"publisher":"Firefly Studios","genre":"Simulation","title":"Stronghold HD","genres":["Simulation"]}}}}