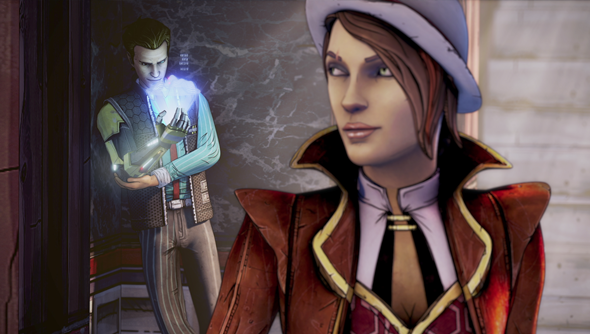 When Telltale co-founder Dan Connors wrote in a Reddit AMA last month that the studio were working on series that “definitely fall into our dream IP scenario” suggestions ranged from Star Wars to Firefly but no one mentioned Game of Thrones.

The fantasy novels have been pretty popular and their jump to television has gone quite well but forays into video games haven’t met with the same success. Cyanide’s RPG didn’t sell a similar number of copies to the books and television series and received a less than enthusiastic response from players. Telltale want to fix that.

It wasn’t just Game of Thrones that Telltale announced, though, They’re also working on a set of episodes set in the Gearbox’s Borderlands universe.

First up, Game of Thrones’ trailer (it’s only a teaser so don’t get too excited):

There are scant details about the project at the moment. The first episode is due for release next year and, judging from the HBO credit in the trailer, it will be tied to the television series as well as the books. That may mean we’ll see the actors from the show having the voice and likeness used in the game.

However, talking to Polygon after the reveal at VGX, Connors said “We’re just really getting into it right now and thinking about characters — who has the most at stake, who has the biggest impact on the world.” So it’s not clear who the episodes will follow or at what time in the fiction the game will be set.

There’s a fair bit more on show for the first Borderlands episode. I’m stressing this is Borderlands because the first few seconds of the trailer seem like a great setup for a Firefly tie-in:

“Rather than just fit in with one of our storylines we just wanted to give them the keys to the kingdom and see what they can create,” said Gearbox CEO Randy Pitchford in an interview with Geoff Keighley at VGX. “Of course, they want to bring in some of the characters that we’ve created but they’ve also created some of their own characters that serve the storylines that Telltale are the best in the world at.

“It’s going to play like a Telltale game,” says Telltale co-founder Kevin Bruner. “You’re going to be engaging characters, developing relationships, but it’s very much in the Borderlands world; it’s big, it’s bombastic, all kinds of crazy stuff going on.

“The great thing about Borderlands is how greedy you can be. You’re playing competitively with your friends and then you’re turning on them, kind of at the same time. Those make for the best moments in the game. So [we’re doing] that with a really strong narrative around it and put those choices in the players’ hands.”

You can see the rest of the Borderlands interview below. I didn’t transcribe the horrendously awkward jokes made by Pitchford and Joel McHale: