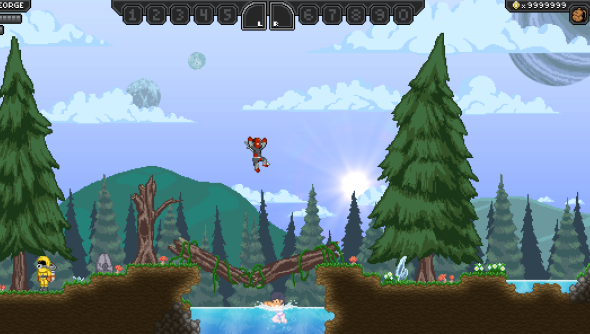 Pixels are currency – not just in the sense that they’ve made Starbound developers Chucklefish an awful lot of money, but entirely literally. In Starbound’s beta, pixels are cashed in at on-ship 3D printers in exchange for items. Is that meta, or just silly? Dunno.

Anyway, you’ll have more of them. Chucklefish have “massively” reduced the pixel cost on early weapons and armour – in some cases making them completely free. And that’s just where it starts with this, the first, super-exciting update to Terraria’s unofficial successor.

Elsewhere in pixels, players can now build refineries which will enable them to turn ores of any kind into money – providing them with an easier means to stay solvent.

The majority of today’s update is dedicated to giving players an easier ride when they first land on one of Starbounds procedurally-generated planets. Bandages can now be crafted using plant fibre as well as fabric, for instance. Monsters now occasionally drop meat when killed with normal weapons, and at a much higher rate when shanked with the new hunting knife. And space travel’s fuel cost has been reduced ever so slightly (hey, whoever said this wasn’t a fantasy world?).

But other changes range between intriguing design decisions, like disabling the ability to teleport to another player’s ship when underground, and tonal tweaks – like the guards of the headline, who’ll now be suitably subservient.

Take a look at what’s in store below. I’ve highlighted my favourite:

“This is just what I’ve done so far this morning,” wrote apparently indefatigable developer Tiy. “I’ll add to this list as more is added for tonights update.”

Were you among the throng that descended on Steam to play Starbound last night, and the night before? How’ve you found its flavour of space-based survival?