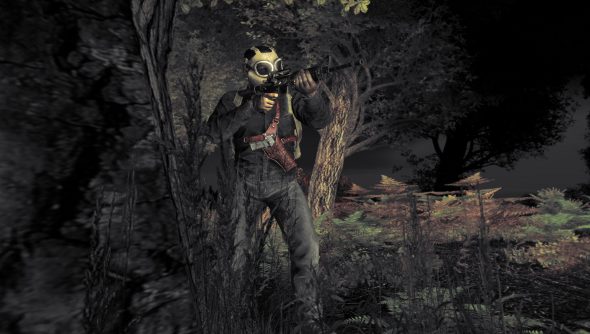 It’s official, Steam has been infested with shambling corpses and people with guns. Well, more so than usual. DayZ, the standalone spawn of the celebrated Arma mod, has finally made its way to Steam Early Access. There’s no point in trying to avoid it. They’re coming to get you.

You can pick up the big ol’ survival MMO right now for just under 20 of Her Majesty’s pounds. You might want to hold off, of course, because it’s an alpha and thus comes with a whole bunch of caveats.

“WARNING: THIS GAME IS EARLY ACCESS ALPHA. PLEASE DO NOT PURCHASE IT UNLESS YOU WANT TO ACTIVELY SUPPORT DEVELOPMENT OF THE GAME AND ARE PREPARED TO HANDLE WITH SERIOUS ISSUES AND POSSIBLE INTERRUPTIONS OF GAME FUNCTIONING.” Look at all those capital letters. That’s a serious warning. Not like the “Beware of dog” signs people put up when they want to make their french poodle seem scary.

A development roadmap has been laid out on the Steam page, explaining that only a small number of mechanics have been implemented and it is just a “test bed”. Despite these warnings, countless people will buy it, storm the Steam forums, and complain until they are blue in the face.

Key features being planned, but not yet implemented are:

So there’s a lot still to do. While some Early Access titles are actually pretty meaty, this really is more for those who don’t mind being testers for over a year. Everyone else is just going to get upset, their anger finally summoning the Elder Gods. Please don’t summon the Elder Gods.