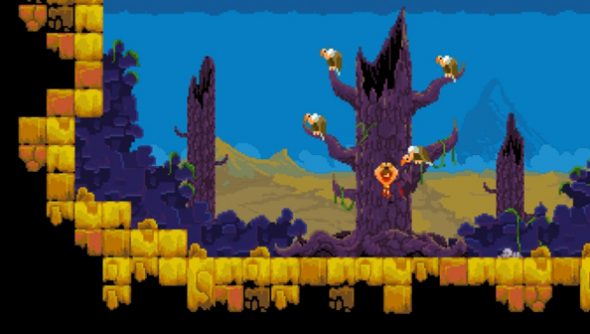 There’s a scene at the end of Tiny Barbarian’s Kickstarter video that’s just brilliant. Our hero is strung from a tree, doomed to have his liver torn out Prometheus-style by the vultures flocking around him. But the barbarian is ready for the first bird to swoop, clamping his teeth around the beast’s neck and savaging it like a terrier before flinging the creature 50 feet up into the air.

The vulture explodes in a flurry of ten-pixel feathers, and in its place a Streets of Rage roast chicken falls from the sky. The tiny barbarian absorbs it, and uses his newfound strength to break his bonds.

Tiny Barbarian DX isn’t the first Tiny Barbarian game – this was. But the first didn’t cost a damn thing to play, and consequently developer Michael Stearns needs help to fund future episodes. He’s a little shy of $9,500, and shouldn’t need too much of a push to top his $12,000 target.

“Modern games are fun, but I like the classics!,” shouts Stearns on his Kickstarter page. “I love that I can often play through one in under an hour – simple, challenging, and satisfying! Those games were short by necessity, but brevity IS the soul of wit, and it’s not a bad way to do things.

“Inspired by SF and Fantasy pulp stories, Tiny Barbarian is made up of individual episodes that, combined, offer a huge amount of content, but individually can be completed in under an hour, while still offering an exciting and complete experience. “

I’m totally with him on the brevity point there, so let’s wrap this thing up. Tiny Barbarian DX will be a 2D action-platformer somewhere between Prince of Persia and Castlevania that, from the looks of it, rewards both finesse and a good memory for attack patterns.

Pledge $8 or more and you’ll get the DX and every subsequent episode for free. You’ll also fund a man who quite clearly finds game development to be a bottomless pit of joy and purpose. Who’s to argue?