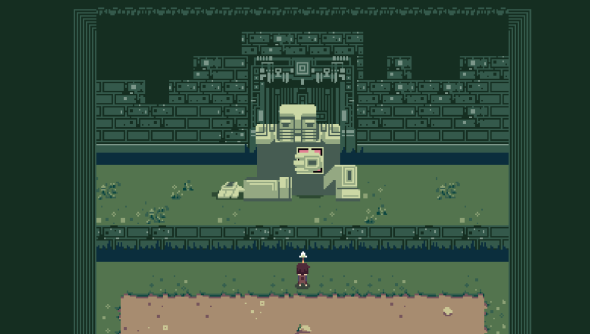 Successfully condensing Shadow of the Colossus and Dark Souls into a single, short indie adventure is no mean feat. It’s even more impressive when you realise it was done in three short day for the most recent Ludum Dare contest.

Titan Souls pits you against four titans, great creatures of stone and glass, and arms you with a single arrow to fight them.

The theme of Ludum Dare 28 was ‘You Only Get One’. Three-man team Claw decided to give you just one arrow and just one hit point. It also takes just one hit to kill a titan. So long as you can hit its weak spot.

The four titans sit at the different points of a compass and you must walk to each of their throne rooms.

Each has a pattern to learn and only a moment of weakness. For instance, to the east is the statuesque creature in the header image. It throws boulders at you, three with its right arm, three with its left, covering its exposed heart with its free hand. As it switches arms it gives you a minute window of opportunity to shoot your arrow home.

All the titans are this challenging.

If you miss you’ll need to run to your arrow and pick it up before you can fire again. Or hold ‘X’ and summon it back to your hand. Summoning is slow, though, and leaves you vulnerable to the titans’ attacks.

Death means a walk back to the throne room from the centre of the map. Each time you get a sense of the world’s scale. It’s not as large as the games which inspired it but, for a top down pixel adventure, Claw have made it seem open and ancient.

Titan Souls is free and definitely worth a play.