Tom Francis, who used to be one of us writer folk until he escaped and started making games, is about to hit a big red button and release a new game. Surely you’ve already heard of Gunpoint, the greatest hacking game ever made (sorry Watch Dogs), but Floating Point is an entirely different kettle of fish.

It’s a relaxing game all about swinging around randomly generated levels while listening to music like this. It’s coming to Steam today, and hold onto your monocles, because it will be completely free.

Floating Point is a simple game focused on collecting points by swinging around the levels without hitting anything. 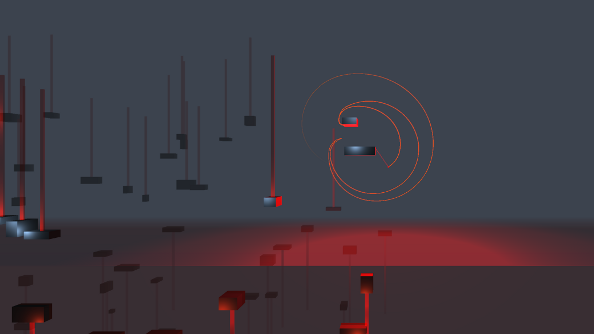 “The only objective is to collect points, and the only thing that increases your points is swinging swiftly, smoothly and elegantly without hitting anything,” says Francis. “As you pick up momentum, you start to glow, the bars you’re collecting rise up, the music kicks in, and your trajectory burns a bright red line in the air, drawing huge, beautiful mathematical curves of your arcing flight.”

He’s also working away on Heat Signature, where players are tasked with sneaking around randomised, modular space ships that can be destroyed. It sounds great, but Floating Point should tide you over.