From across the arena a green cloaked archer pulls on his string, his arrow pointed up at a perfect 45 degrees. I do the maths in the head. The arrow will soar in an arc over a stone platform, and land between my eyes. He lets the arrow go.

I dive forward, pluck the arrow out of the air in mid-flight, notch it to my own bow, and release it back at him at point-blank range.

In TowerFall Ascension, there are no inevitable deaths. Every time you stare down the shaft of the Grim Reaper’s arrow, there’s always a way out. You just have to be smart and quick enough to put a plan into action before someone nails you to the wall first. 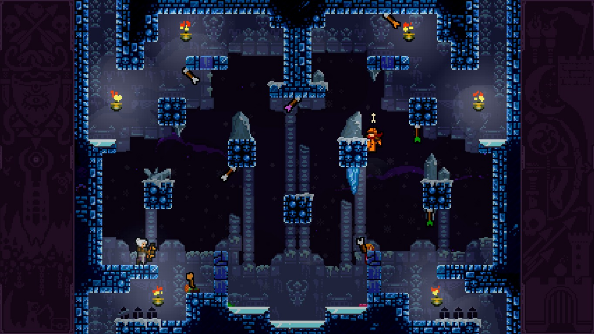 Originally debuting on the Ouya Android console, TowerFall is a 2D multiplayer game rendered in the charming 8-bit pixel art of yesteryear. It’s a bit of a love letter to the days of the SNES and the Megadrive, with exactly the kind of tight, measured controls and systems you’d expect from that era. You fight with three other players, either in free-for-all or two-vs-two, and spend most of your time jumping and dashing around the single-screen, platformy arenas. It’s cramped, it’s blisteringly fast, and nothing happens how you envisioned it.

Every player takes on the role of an archer, which immediately makes killing anyone a true challenge. Arrows are slow, have limited range, and require precision aiming. You also only have three, so missing a shot puts you at a grave disadvantage. You can pick fired arrows back up, but between you and your misfired projectile is certainly at least two archers ready to make a Boromir of you. But two enemies and a lack of ammo doesn’t mean game over. Your archer can dash in all eight directions, and if you dash into the path of an arrow, you can grab it and add it to your quiver. Suddenly an enemy archer is a potential resupply rather than a threat to run away from.

Perhaps both enemies that stand in your way have also run out of arrows, though, and are charging at you to stomp on your head, which is the only other killing option they have left. There are still options. You could fall through that gap in the floor, which rather than plummeting you to doomsday will simply drop you out the sky. Running to the left of the screen will work similarly, causing you to emerge on the right of the screen where a treasure chest lies in wait, filled with laser arrows which can bounce across the arena and slice apart any player in its path. 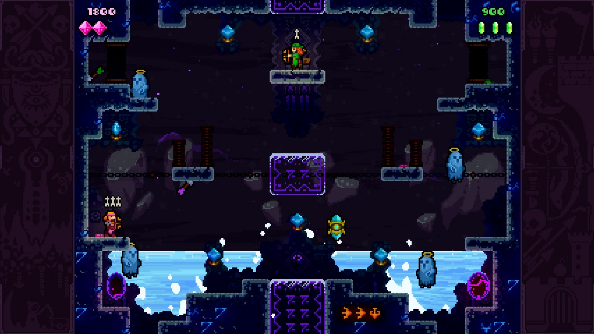 Each arena is a puzzle of nooks, out-of-reach platforms, and buff-providing treasures. Navigating them is just as hard as eliminating the enemy, and so each round becomes a mad blast of desperately dashing up walls and rushing towards chests, hoping that this new vantage point is exactly where you need to be, or that the chest contains the drill arrows you desperately need right now to kill that guy through a wall. You can also set different rules before each match, such as putting murderous lava boundaries each side of the map or forcing the whole game to play in slow motion. If this sounds on the cusp of insanity, then you’ve got the right idea. Now just add all three other players shouting incessantly at you.

TowerFall Ascension is local multiplayer only. As such, everyone has to be in the same room with four controllers plugged into your PC (keyboard controls are available, but feel far less intuitive and responsive than the controller). If you ever played Super Smash Bros. back in the days of the Nintendo 64, you probably know exactly what to expect. Jibes, air-punches, elbows-to-the-stomach. This is as classic as multiplayer gaming gets, and that acts as both TowerFall’s crown and chain. It genuinely is a great little arena game, but I think the audience that will best appreciate it – those who were young during the 8-bit era and fondly remember being sat crossed-legged on the bedroom floor with friends hammering on slab-like controllers – don’t play local multiplayer anymore. They have families now, with partners who don’t play games, and those friends they used to game with live halfway across the country now and can’t just pop round for a couple of matches. Having long relied on online multiplayer to maintain my gaming friendships, trying to assemble a team of fighters for this review actually took genuine effort. 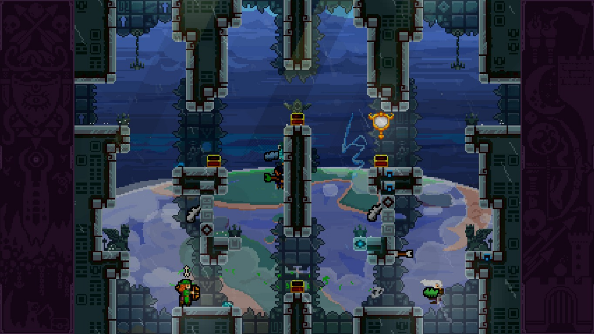 Outside of the core multiplayer mode there are some additions that can be played solo. Trials drops you into challenge room-style maps with a handful of arrows and asks you to shoot a set of straw target dummies in as fast-a-time as possible. Each new stage also introduces a new buff, which helps you learn their uses in a more forgiving environment before heading into the arena. There are also par-times to beat on each stage, although trying to clear a set in less than seven seconds is achievable by only the game’s most die-hard, super-human fans.

Quest mode asks one or two players to take out waves of enemies, and is a brutally difficult process even on standard difficulty. With one-hit kills and a small amount of lives, it induces frustration that can’t be alleviated by the humour of your death being at the hands of a friend. Again, it’s a mode only for TowerFall’s most enthusiastic of fans, and certainly not an element to consider if you’re thinking of playing the game entirely on your own.

It’s additions may feel almost wholly unnecessary, but they do nothing to dilute the genuinely great multiplayer core. The lack of online is surely a barrier to entry for many, but for those in the right environment – university halls, Friday-night game sessions, after school with buddies – TowerFall Ascension consistently delivers massive heaped doses of fun. It revels in humiliation – even saving death replays as GIFs for easy social media bragging – and is likely to destroy friendships for an hour or two. And the more heated the arguments and the fouler the swearing, the more likely you are to do it all over again next week.