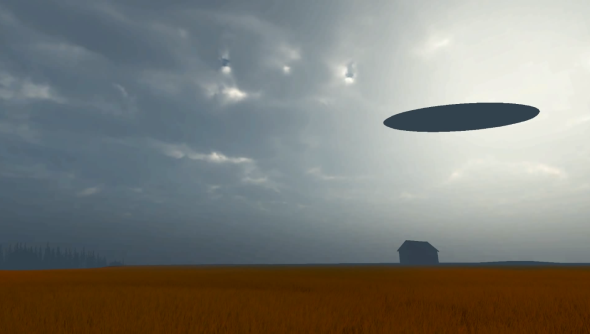 TRIHAYWBFRFYH, or to call it by its full name, The Rapture Is Here And You Will Be Forcibly Removed From Your Home, is visually striking. It’s clearly walking in the footsteps of Dear Esther and that’s no bad thing.

It’s free, too, which makes it difficult not to recommend.

You’ve 20 minutes till the world ends. A great black disc fills the sky and looking at it fills your head with the sound of the void. It’s Lovecraftian in the simplicity of its horror. It is otherworldly power made real.

There’s not much toTRIHAYWBFRFYH. You can walk about the doomed plains, searching its forests, its fields, and its hilltops but all you will find are beacons. They play recordings of Lovecraft extracts.

There is not much game to this game, then. Instead you are treated to an experience. It is similar to Dear Esther but lacks that game’s direction. In Dear Esther you are always progressing towards the beacon at the island’s edge. In TRIHAYWBFRFYH you are aimless and left to walk back and forth over a too open map.

It would also help if there were more landmarks or distinctive geography.

TRIHAYWBFRFYH is rough around the edges and would benefit from another development pass. The sound is uneven with the different voice artists using a variety of recording equipment. The game isn’t optimised to run smoothly and it renders poorly because there are too many grass models dotted about the place. Still, despite these and other problems, it’s an arresting world to spend 20 minutes in.

{"schema":{"page":{"content":{"headline":"TRIHAYWBFRFYH adds Lovecraft to a walk in the countryside during the rapture","type":"news"},"user":{"loginstatus":false}}}}