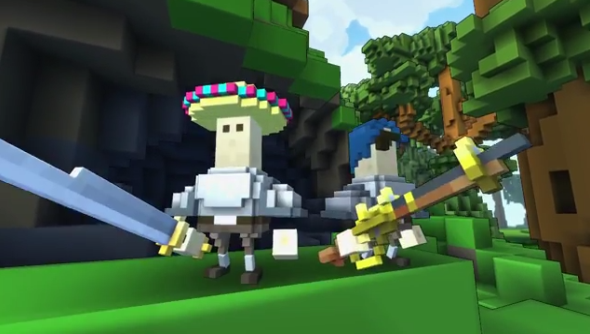 “We’re actually resetting the worlds pretty often,” Trove’s lead developer Andrew Krausnick tells me. “You beat the world’s… we’re calling them Prophecy Quests – so you awaken the Balrog, you have to fight him, you defeat him and get a bunch of rewards for beating that world and a new one spins up.”

He’s explaining how Trove differs from games like Minecraft, CubeWorld, and Terraria – Trion’s game has been compared to all of them since it was revealed last month. Trove clearly takes elements of all those games but there’s nothing quite like it out in the world and playable right now.

For some of you, Trove will scratch an itch nothing else can.

Trove is a bitesize MMO. You pick a class, kill monsters, find loot, explore dungeons, kill bosses, and you do it all with friends. Servers are small fry in comparison to World of Warcraft, there are only 40 players allowed in Trove’s worlds. They don’t need to be big, though: you aren’t fighting each other, you’re fighting a big bad.

Krausnick talks about the Balrog when giving an example of a final boss, but that’s only one that Trion are working on. Each world has a boss and your party of players will need to level up and loot up before they can face it. Kill that ancient evil and you’ll be rewarded with epic loot that you carry into the new world.

Each new world is more difficult than the last. In a sense, it’s like moving between regions in a traditional MMO. You come across more powerful loot and more dangerous enemies. Unlike a traditional MMO this region is entirely randomly generated and is made up of voxels, meaning you and your friends can break the terrain down into bricks, dig your way into dungeons, and build castles that are the envy of your peers. 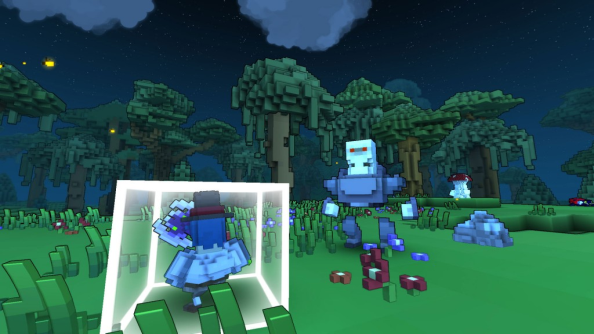 The short lifespan of worlds gives Trion “a great opportunity to make new dungeon creation tech and zones that just get put in the world so the experience stays fresh,” Krausnick says. “I don’t know any other game like this that’s taking this approach.

“One of the things we want to do is keep it fresh all the time. So when you start a new world we want some new elements in there for you to discover the next time you play.” Trove are doing this by creating different rulesets. These code scripts can be snapped together to create a variety of different worlds.

The scripts are easy to chop and change, too. “One of our other engineers, who actually isn’t even on the project, this last weekend was playing the game and said ‘Ok. I’m going to take this ruleset, stack these rooms on top of each other and I’m going to make a tower dungeon.’ And he did that and we said “That’s awesome. We’re going to put it in.” 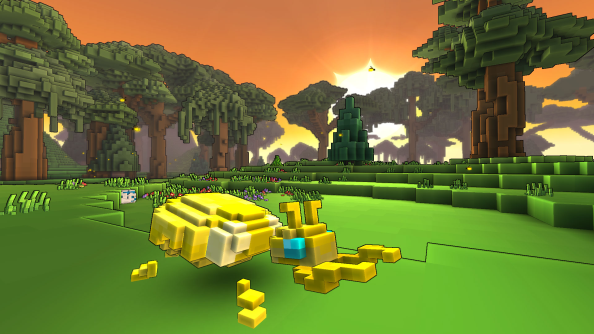 Soon Trove’s dungeons will be filled with chests that spawn “a bunch of monsters” and levers that drop a load of bombs on you. “Really simple scripts that you can combine in a bunch of different ways to make new and interesting rooms and environments and things to encounter in the world.”

The scripts are so simple that Trion hope to open them up to the community. Players can submit their own custom scripts to Reddit which can then be voted up to the attention of the team. They can then test it and slot it into Trove’s world generator.

Trove’s still in very early alpha and the team plan on staying in alpha for a long time. They’re just enjoying releasing new features to the community and making changes based on their response. Trion have opted for a Reddit community instead of forums in the hope that players’ greatest concerns will rise to the top of the discussion via upvotes.

Despite it still being early days, Trion have hit on something great for Trove’s end game. It becomes a competitive World v World game but not like the grand battles of Guild Wars, more like a three-legged race at a summer fete. It ties together their world generator and their unique guild system.

“World size in our game is capped at 40 players,” Krausnick explains. “We’ll probably move it up over time as we get the tech and increase the capacity but it’s never going to be MMO world size. We’re thinking that a world is going to be owned by the equivalent of a guild. 40 to 60 players who play together.”

For the end game a world is generated and the seed value is shared online so that different high level guilds can duplicate that world on their own servers. The guilds then race against each other to complete that world the fastest and with the highest score. It’s competitive but not PvP.

The brilliant part about this style of multiplayer is that each guild “is playing through the same [world], but it’s coming out totally differently through the chaos factor of loads of different players.” By the time two guilds complete a world, killing the big bad boss that owns that duplicated voxel kingdom, they will look completely different from each other. One guild’s world may be full of grand castles that protected them from the boss’ minions while the the other’s might be a maze of underground tunnels that safely led them to the boss’ lair.

Hearing Krausnick talk about Trove’s endgame I keep drawing comparisons to EverQuest Next’s diverging servers. SOE are starting all their servers the same but as players build new cities or change the landscape of their world they will differ from other servers’. SOE predict it will take years to see that sort of divergence, though. In minutes Trove’s players can change their short-lived worlds permanently.

Trion have a leg up of over SOE in another respect: EverQuest Next isn’t due for release till 2015; Trove is already playable.

The game is still early in development but already it promises a wonderful bag of goodies that will be liberally poured into worlds for players to discover. Just look at this: 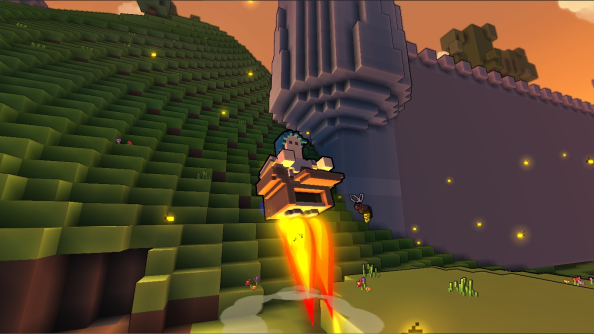 A vein of silliness runs through Trove that you don’t find in other MMOs. Nothing about Trion’s game is po faced. There is no overarching lore that aims to contextualise the game. Instead, one of the first weapons I found was a wooden spoon. It was more powerful than a sword.

It worries me how willing I am to recommend a game because it uses a wooden spoon as a weapon.

And these are just items that the developers are making. In “a week or two” Trion will again be stealing SOE’s thunder by giving players the same tools they use to make in-game items.

“We actually use a third party tool called Qubicle to make everything in our game,” Krausnick tells me. “And we’re going to open that up, put it online and say ‘Hey, you guys want to make some stuff, upvote it, if it’s really cool we’ll put it in the game and we’ll give you credit for it.’

“We’ll take it, make a recipe for it and we’ll do that side of things to get it in the game and to everyone.”

If Trove’s community get involved the amount of items available for the world generator to stash in the game’s dungeons will skyrocket.

Trove has an aura of slapdash fun. Its worlds are built to last only a short while before being replaced by something entirely new and surprising. Its players are building things all over the maps, statues of anime characters, houses that are slightly bigger than their neighbours, or messages on the ground for others to find.

I can’t wait to see what else comes out from the alpha.