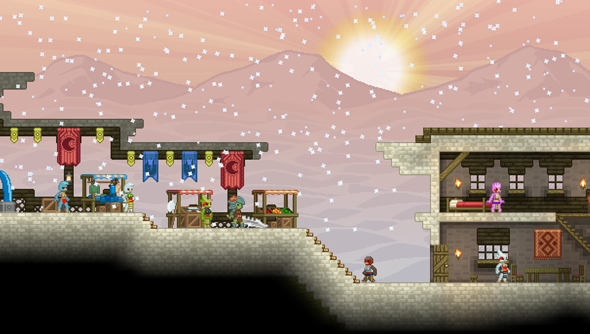 Procedurally-generated interplanetary exploration and survival – breeeathe – side-scrolling platformer Starbound made a deep impression in Steam last night, thanks to the pixelated pickaxes of more than 50,000 players.

Developers Chucklefish held back to the tide for an extra hour on Twitch while a few teething issues were de-toothed, before the horde descended on the beta store in a blast of light, sound and credit card details.

96,015 Earthbound humans have bought a copy of Starbound in some form to date, making its creators a grand, still-rising total of $2,149,388.

Starbound is currently the second most-played game on Steam, behind only Dota 2. At its peak today, 55,027 players were building homes, digging holes, uncovering schematics and being murdered by hopping xenos. Its next closest rival was Team Fortress 2, with 47,653 concurrent users at its best.

The Starbound site lays out a Kickstarter-like system of purchase, incorporating seven tiers – the last of which stretches to $2000 and offers a range of in-game immortalisation options. You need only pay $15 for a Steam key and a copy of the game’s soundtrack, however.

Chucklefish report they’ve been “swamped with emails” about issues since release, and are working their hardest to tackle the bugs and crashes that have inevitably emerged in the beta. For the time being, there’s a list of temporary workarounds on their forums.

Is it you lot, pottering about distant planets and changing the face of Steam? ‘Fess up.