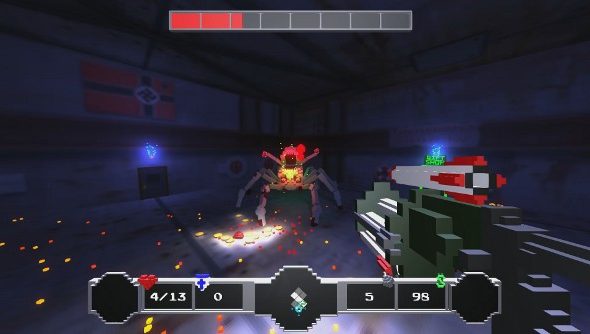 Steam Greenlight, Valve’s process for approving indie and user submitted games on Steam, has once again found itself at the center of controversy, this time over an indie shooter named Paranautical Activity.

The developers of the game, Code Avarice (consisting of Mike Maulbeck and Travis Pfenning), had put it on Greenlight in the hopes of Steam approval, but they switched tacks after being contacted by Adult Swim, who promised to publish the game on Steam. Maulbeck and Pfenning abandoned their Greenlight submission.

However, it’s emerged that their publishing deal for Paranautical Activity to appear on Steam via Adult Swim was blocked by Valve. According to the devs, Valve explained that they “didn’t want to send the message that indies can seek out publishers to bypass Steam Greenlight.”

As Code Avarice scramble to get their Greenlight campaign back on track, we asked Valve’s Doug Lombardi how indies should approach the choice between Greenlight and straight publisher backing.

“We review Greenlight votes, reviews, and a variety of factors in the Greenlight process,” Lombardi said. “However our message to indies regarding publishers is do it for your own reasons, but do not split your royalties with a publisher expecting an automatic ‘Yes’ on Greenlight.”

Code Avarice appeared on Green9090’s Youtube channel to explain how this all looks from their side of things, and why it’s so hard for new indie developers to raise awareness of their Greenlight campaigns.

For now, Code Avarice are just hoping the attention they’ve received from Youtube and their community will put them over the top on Greenlight. But from their experience with Greenlight, they’ve become much more wary of Steam, and they make some good points about how Greenlight can be a Catch-22 for indie newcomers.