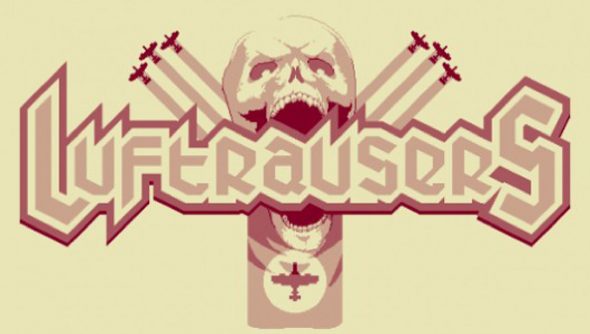 Vlambeer, creators of Super Crate Box and masters of the perfect-pop indie game, are working far too hard. For the last few months Jan Willem and Rami have split their time between Luftrausers, a PC sequel to this, and Ridiculous Fishing, an iOS sequel to this. Two games which, incidentally, are scientifically impossible to link to without playing first.

Are you back? Okay. It transpires that the pair may have agreed to do anotherproject – a version of Luftrausers for one or two of Sony’s devices. Talks are still ongoing, but if they end in handshakes all round, the game will hop from its long-gone tentative ‘before 2013’ release date to sometime about three months from now. Before you fetch the ethernet cable we reserve for blood traitors, though, you should know that it’ll benefit from its extra time in incubation.

Vlambeer plan tomake use of the weeks spent jumping through Sony-shaped hoops by applying several additional licks of polish to Luftrausers.

“Not only do we need to support these new platforms in the code, we also need to make sure they pass the certification processes,” writes Rami in a new blog post. “Luftrausers would be best launched on all platforms at once, as far as we concerned, so that means we have to push back the release just a bit.

“We’re now thinking it shouldn’t take too long – so hopefully something like early spring, but as always – it’s done when we’re happy with it. Next time we’ll announce something regarding dates, it’ll hopefully be set in stone and ready to go.”

In the meantime, play Luftrauser (singular) – the best game ever made on the weekend. That Kozilek soundtrack is just killer, isn’t it?