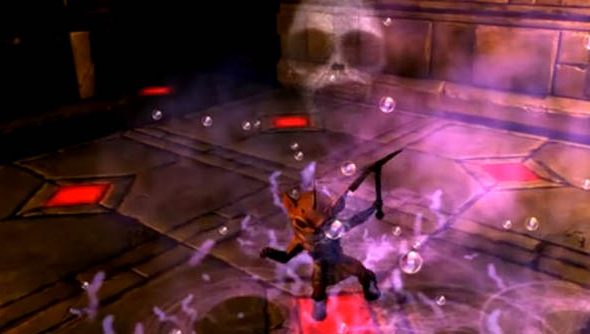 Hot brimstone. Torture devices. Imp sacrifice. Mmm, it’s enough to get me out of bed in the morning. Though in the option to customise and create my own dungeon apparel and I’ll even put on a pair of trousers. So consider me fully dressed after reading about War for the Overworld, a spiritual remake of Dungeon Keeper through with all the trappings of a modcon.

It’s another Kickstarter project, yes, but it’s also in a much more ready state than a number of those we see come a knockin’ so have a look below to see if it tickles your torture buds.

I only got around to playing the Dungeon Keeper games for the first time this year, I was more of a theme Hospital man in my youth, but that mix of scratching out and building a vast and sprawling dungeon, populating it with nasty hellspawn, and decapitating, debilitating, or, otherwise, disheartening, the dastardly ‘goodies’ struck a chord with me, as it did for many when the games were released in the 90s. So seeing another developer come along and tackle the devil game genre (see what I did there) is a wonderful sight.

The footage shown in the video, and as always with footage we have to be cautious of how representative of a final game it is, looks like a solid remake of the core game of Dungeon Keeper: you designating areas for your imps to create rooms by mining the solid rock, placing items to mark what type of space you’re creating – be it a torture room, a training area, or bunk bud bedroom – while also preparing defencesagainstthe forces of good. In fact, other than a facelift, there didn’t seem a great deal of departure from the original Bullfrog game.

The main change up from the Bullfrog source material is the inclusion of the Dungeoneer modding tools. A software that will allow you to create new levels, objects, animations, and characters. Creating a perpetually expanding game – if the community develops for it.

there Unlike many other Kickstarters, War for the Overworld does have a demo version (unity plays silly buggers for me on my laptop so I couldn’t test much in the way of functionality, unfortunately) which looks wonderful and sounds great.

Another departure from Kickstarter tradition is a firm release date and beta period. 30 August for the full release and March for the beta release.These, of course, could slip, though the developers are giving themselves nine months before release of the base game – something they consider to be playable and contain the core game but not feature complete, so there would still becontinuingdevelopment after that initial release.

If you’re interested in back the project then head on over here.

Disclaimer: while writing this news post I became a backer of the project. I tried not to but I got caught up by all the promises of the project. So, for your sake and mine, strip the above post of any praise & bias and instead go on the facts: Dungeon Keeper rip-off, promising an August release and mod tools, will make your life more fulfilling if you own a copy.