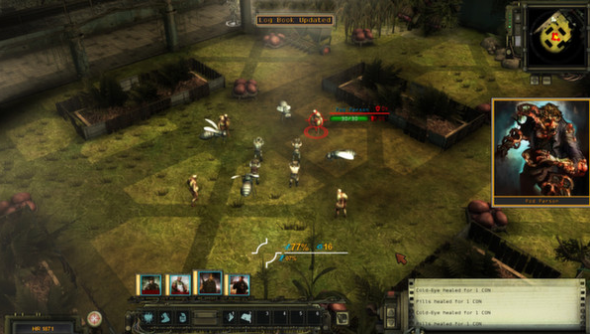 Wasteland 2’s gone on sale through Steam Early Access. Previously the game was only available to Kickstarter backers who had pledged $55 or more.

The version on Steam Early Access is a tad pricier, at $60, making it one of the more expensive Early Access games, but it comes with a stack of extras.

“Here’s the thing: we’ve got a sequel to the classic Wasteland 1, one of the original RPG’s and the godfather of the Fallout series,” write InXile in the store page description. “Like the original, this one’s a turn-based, isometric, story-intensive exploration of the radioactive wastes of the American Southwest, heavy on choice and consequence. 20 years we have been waiting for the moment to have a sequel to Wasteland and the moment is near.

“Now, time was we could get a publisher to do the beta for us… but like the United States in 2112, those days are long gone, a windswept, radioactive memory. Like the Desert Rangers risin’ from the ashes of the old world, we’re building a new community, a new reality for the world as it is: from the Kickstarter community to the Steam community, this new world only works when people are weighing in with their ideas and impressions.”

The game is £30 for UK shoppers and that gets you Early Access for the game, two short stories written for the game, the game’s soundtrack, and a concept artbook. That price will drop when the game finally releases but it won’t come bundled with the extras.

This alpha release isn’t the full game. It’s “basically feature-complete. We’re including 30% of the game levels so you can see how Wasteland 2 plays: AI, gear, inventory, creatures, line-of-sight, exploration, world-maps, fast travel, dialogue, and more. Oh yeah: you’ll also get to test out the combat system. Hell, that’s a big part of the fun here. We’ve got a cartload of quests, memorable characters, NPCs who’ll be happy to join your party for a price (or for vengeance), and all the explosive fun of a radioactive monk without any of that actual radiation.”

And, being a Steam release, updates are easy to push out on InXile’s part. “We’ll be adding even more content in the form of new levels, killer weapons and NPCs and of course fixing those pesky bugs that the programmers put in the code. (We keep telling them to stop putting them in because they’re just going to have to take them out later.)”

It’s a big step for Wasteland 2. It’s one of the largest successes on Kickstarter raising almost $3 million. Despite being delayed, it’s managed to beat Double Fine’s adventure game, Broken Age, to release. Broken Age was started earlier but was also hit by delays.

Wasteland 2 can be bought on Steam.