“I actually had a dream about Peter Molyneux while I was here,” Gaslamp Games’ Nicholas Vining told me on the last day of GDC, launching into an impression of the famed / notorious British developer. “He showed up in my dream and he’s like, ‘Nicholas, I have something for you.’ So he opened his hand and there was this apple. ‘Take this apple. Bury it deep within the fertile soil. It will reveal to you all the secrets of game development.’

“And then I woke up. I didn’t learn the secret of game development from Peter Molyneux.” Vining paused sadly. “This brings us to Clockwork Empires.”

You already know about Clockwork Empires. The oddball city-builder was one of our most anticipated games of the year, a game about a colony founded by a hapless version of the Victorian British Empire, on the shores of a sinister and magical wilderness. It’s a wedding of Python and Lovecraft at Rorke’s Drift, officiated by Dwarf Fortress.

To understand what makes Clockwork so promising, however, you have to understand just how effortlessly creative and quirky the developers at Gaslamp Games are. During my meeting with them at the end of GDC, on a day when everyone was just slogging through the final hours of the week-long grind, they seemed like a bunch of children playing “let’s pretend” in a sandbox. And as with many children’s games, whose narratives and meanings are impenetrable to adults, their imagination runs in some truly macabre directions.

Yet if there is one thing that I worry about with Clockwork, it is that Gaslamp are so unconstrained, and so eager to please their fans, that they might bite off more than they can chew. It’s the DayZ problem: the more you talk about this game, the cooler it sounds, the more new ideas you have for it, and the more complicated it becomes. During my demo, two things were abundantly clear. First, the GDC build of the game was very, very broken. Second, Gaslamp want Clockwork Empires to do almost anything that your imagination can come up with.

It is a recipe for brilliance, disaster, or both. Whatever else it turns out to be, Clockwork Empires will not be boring.

For the demo, Gaslamp’s David Baumgart showed us the birth of a promising young colony. A variety of citizens were standing around on a foreign shore surrounded by the tools and raw materials they would need to start carving out a foothold. But for now, there was no housing and no luxuries and, in short order, things started to take a turn for the worse. Sadness and depression started to overtake some of the settlers, and they began to commiserate together… over the colony’s liquor stockpile. 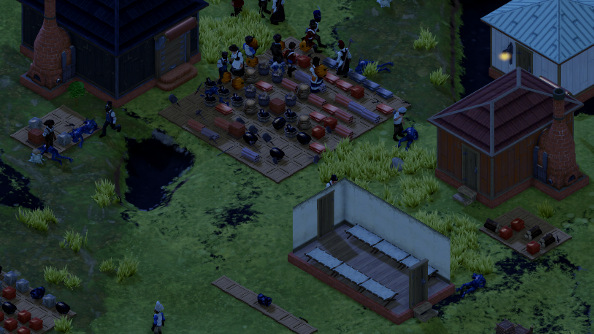 Which is how I learned about the persistence of memory, and the growing biographies of each of Clockwork Empire’s citizens.

“When characters have these interactions, it will create a memory for both of them. If the conversation goes well, they’ll like each other a bit more. If it goes poorly, a little less. All these memories are created by interaction with people and events that happen in the world, and they will fade over time. And they can drink if they are particularly upset. Like now,” Baumgart said, pointing to a woman pouring the contents of a bottle down her throat.

“When she drinks, it will actually take a random memory and allow her to forget it. So drinking can actually solve your unhappiness… or make it worse.”

A click on one of the characters revealed the story of their lives to date. There wasn’t much here at the start of the colony’s life, but it was surprising how detailed these bios could be. There was background on who they were back in homeland, what brought them to this frontier, and the things that had happened to them since the game started. So far, it was mostly, a chronicle of sad repetition as the characters lingered around their campsite, waiting for Baumgart to start building them a colony.

Instead, he killed one of them. All because I asked a question about cannibalism.

The villagers are a resilient, practical sort. While they were initially horrified by the sudden death of one of their number, complete with a menacing shift in the accompanying musical score, it was only a few moments before one of the villagers gamely rolled up her sleeves and reduced her former drinking companion into steaks. Circle of life, Simba.

That’s not to say that citizens just shrug off the increasingly ghoulish lives they lead in Clockwork Empires. That memory system we talked about earlier? Well, trust me, carving up your drinking buddy and having him for dinner is the kind of thing you remember. It’s also something that takes you closer to madness.

In fine Lovecraft-inspired gaming tradition, madness is the endgame for characters who have had a rough go of it. Most citizens in Clockwork start as regular Joes and Janes, doing hard manual labor in the fields or overseeing work crews or surveying the new countryside. But as they are exposed to more misfortune and more occult and paranormal influences, they begin edging closer to unhinged lunacy.

“People can go mad on the frontier, as they are exposed to That Which Man Was Not Meant to See,” explained Vining. 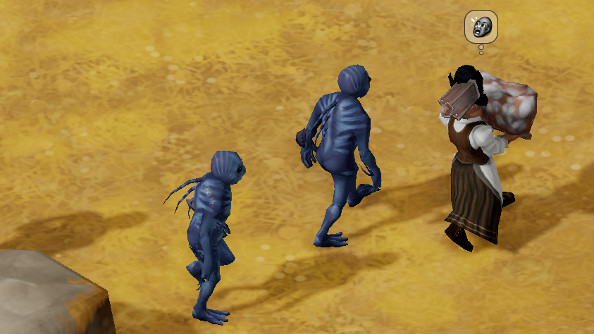 Vining, more than anyone else on the Gaslamp team, seems always to have one foot inside the world of Clockwork Empires. Where Baumgart and Jacobson speak about it from the outside looking-in, Vining almost seems to be a longtime resident of Clockwork Empires. One that is bursting with civic pride and is only happy to give visitors a guided tour of his curiously wonderful community.

“So obviously, being forced to butcher and eat someone is very upsetting and they will be upset and they will also go mad. And as people go mad, they start building mad things,” he said.

On the screen, a pair of characters were having a conversation near the edge of the forest, not far from where the cannibalism incident occurred. An odd icon appeared in their speech bubbles.

“There you can see somebody who was just so upset that they were talking approvingly of cults,” Vining said. “And this person was like, ‘Yes! I am really interested in joining your cult now!’”

“They are losing faith in the way of the Empire,” added Baumgart. “Maybe there are other answers. Out there: in the night, in the stars.”

“The thing I keep hearing whispering in the night,” Vining said. “Maybe it knows.” 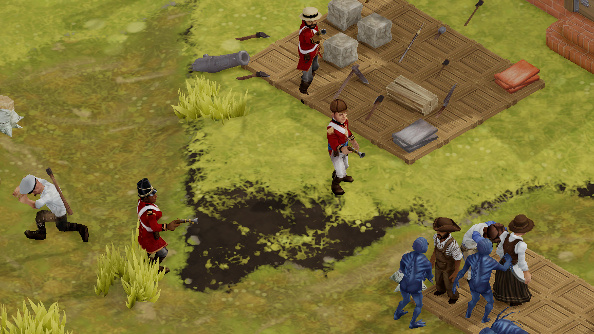 This is where Clockwork Empires begins working to derail you. You might be able to give people jobs and create their infrastructure, but Clockwork’s citizens can get up to bad things in their off-hours. Cults can form and begin pursuing all manner of mischief, up to and including raising an Old One to come level the town. Or they might prove ineffective and just end up printing cultist literature and having meetings at night. Like Shriners, but for an Elder God.

On the other hand, characters like the police inspector can be just as dangerous in their own way. When they catch wind of a cult, they won’t just bust up the meeting. They’ll likely break up the meeting and then burn down the building where it took place, just to be sure. That might be effective at dealing with the cult, but it’s probably going to bring morale down in the colony, which ironically makes everyone more susceptible to problems.

Then there are characters like the Naturalist, whose job is literally go exploring the unknown regions of the colony, unearthing God-knows-what along the way. Sometimes she’ll disturb monsters, or bring back a curious discovery that really should have been left where it was.

But for all its occult flavoring, Clockwork Empires is a city-builder and worker-management game. You have quite a bit of control as the “invisible hand of the bureaucracy”, as Gaslamp CEO Daniel Jacobson put it. While you can’t precisely control your people, you can control what jobs they are assigned to and who manages them. You are at once the top executive of the colonial enterprise and its HR officer, trying to make sure everyone finds the right fit.

So not only do you build the workshop that will take raw lumber from the forests and convert it into planks for new construction, but you also make sure the lumberjacks and carpenters are being supervised by someone who, ideally, will get a lot of hard work out of them without being a dick about it. A bad supervisor might get a lot of productivity out of his workers, but he might also exhaust them or send them over the edge.

“Through the character’s personality, you have a lot of influence on how a work crew actually works,” Baumgart explained.

“There’s a lot of focus in the game on the character interactions,” Jacobson elaborated. “It’s common for — when games actually simulate the characters — it’s sort of a secondary objective. You’re just sort of fighting against them as you’re building stuff.

I’m taking a lot about Clockwork Empires on faith, because unfortunately, my game developed a fatal bug early in my session. My main workshop became a disaster site as character after character got stuck in the same square in front of the door, unable to move through or away from that spot. Half my population ended up sharing the same tile, and could not be rescued.

But what I saw and, more importantly, what I heard, left me ridiculously excited for Clockwork Empires. Almost every question I asked spawned a new line of discussion as Vining and company went into detail about how they would make my sickest dreams come true. It was like being on videogaming Oprah, with the Gaslamp crew yelling, “You get a feature! And you get a feature!” Except this is Clockwork Empires we’re talking about, so it’s more like this.

“Literally everybody wants to have a town where the cults run everything, and it’s still okay,” said Vining. “Everybody wants to reenact Sweeney Todd. So we’re going to have to oblige you.”

I like the idea of Clockwork Empires having degrees of corruption before a colony finally snaps under the weight of its own dysfunction, but I also worry a bit that trying to create an entire viable “Cult path” could undercut the tension.

What fascinates me is not the idea that you can somehow keep things rolling as a fallen colony, but that you can end up playing the part of Basil Fawlty, dealing with increasingly severe dysfunction and weirdness and hoping, somehow, to avoid your day of reckoning just a little bit longer. The day when all your people go mad, and begin building mad things.