In my dreams, we’d get turn-based wargames based on the engines from Company of Heroes and the Total War series. That way we could have visually stunning, realistic portrayals of historical conflicts. But while I doubt I’ll ever see a Close Combat game with the production values of Company of Heroes, I do believe my ship may have come in with HistWar: Napoleon.

Seriously, this trailer makes it look like a dream for people who care about historically accurate regimental uniforms and the difficulties of Napoleonic command and control.

I’ll be honest: this borders on pornography for me. That part where the player sends an order by courier to Marshall Soult — Oh my, I’m getting the vapors just thinking about it.

Napoleon is one of those rare historical figures who seems to grow larger the more you learn about him. His disastrous invasion of Russia and defeat on the fields of Waterloo is what is best remembered about him, but that belies the truly revolutionary military genius he brought to warfare. It also underestimates just how titanic his empire was, and the enormous feats of arms it took to bring it down. Looking at this glorious trailer, with its nearly Napoleon: Total War-levels of beauty, I think we may finally have a wargame worthy of the subject.

But just so you know my head isn’t just turned by a pretty face, check out some of the options on offer over at the HistWar website: “Options : Fog of war with the option of conditional viewing of enemy units (taking into account the distance between the unit and its command), message interception, delayed orders and limited ammo…”

This is really important for any wargame covering this era. The armies were huge and so were the battlefields. Napoleonic warfare was largely about the twin difficulties of managing unreliable information, and a inconsistent subordinates. That’s true of any war, but the scale involved and relatively primitive technology available means that Napoleon’s job was considerably different from Alexander’s or Eisenhower’s. It’s also what makes this a fascinating subject for wargames.

Of course, Napoleonic glory doesn’t come cheaply: the base game runs you44,89 €. That’s kind of a big ask for what is clearly a work-in-progress. At this stage, it seems like HistWar: Napoleon is chiefly for people who need a serious Napoleonics sim, and they need it yesterday. That pretty much fits me to a T, but for people with a lower tolerance for work-in-progress, this is probably a project that belongs on your radar, not in your shopping cart.

I mean, for the life of me, I cannot figure out what the hell this chart means. How “finished” is this first instalment? 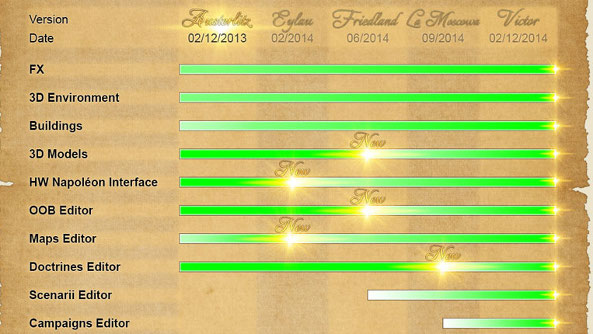 HistWar itself is an interesting project. It was notorious vaporware for years, until suddenly it wasn’t. I never did get around to playing the first game, though I heard it was patched into decent shape. Tim Stone eventually liked it, which is basically a blessing from my own personal Wargame Pope. But this new edition looks to be quite something. Hopefully the version available now is good enough to hold players’ interest until the next battle becomes available.

Anyone had a look at it? I’ll be trying to get my own copy soon, but perhaps there are some HistWar veterans who can shed some light on what we’re getting here.