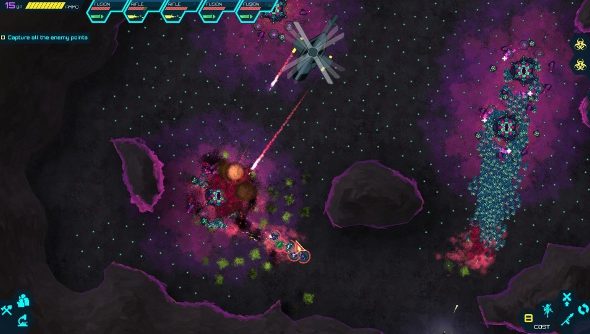 Infested Planet is not like other RTS games. It doesn’t bother with micromanagement: there are no resources to mine, tech trees to navigate, or even units to recruit – if a marine dies it respawns at the nearest outpost free of charge. Instead, it focuses all your attention on stemming the tide of thousands – literally thousands – of alien bugs.

It may look like a bit of throwaway fun, but in my opinion, Infested Planet is the most subversive game of 2014.

It looks like a stripped down Starcraft. You command a Terran-like army against a Zerg-like swarm. The aim of each level is simple: destroy every alien hive and build a marine outpost in its place. But where Starcraft’s Zerg tend to come in waves, once a hive is awoken in Infested Planet it lets out a constant stream of bugs.

The early streams of bugs, pouring out of the nearest hives, aren’t much of a challenge – put a couple of marines or a turret in their path and they won’t be able to get past the barrage of bullets. However, as you capture ground more hives stir. Rivers of bugs pour from the different hives towards their nearest outpost, forcing you to spread your scant forces across multiple fronts. 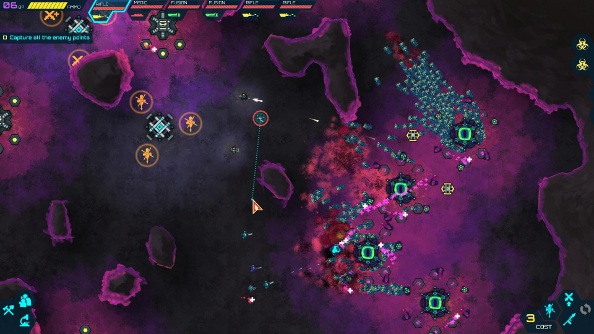 You’ll often find yourself in stalemates. Your seawall of troops and turrets is firmly established, holding back the tide of the bugs, but to take the next hive you have to pull troops off the defense to make an assault, potentially springing a leak in your defensive barrier, letting thousands of bugs run towards your bases.

This is where Infested Planet starts to diverge. It’s not about rebutting an attack and then countering: the pressure is constant. Once a hive is active it doesn’t stop. Your job is to manage the flow. 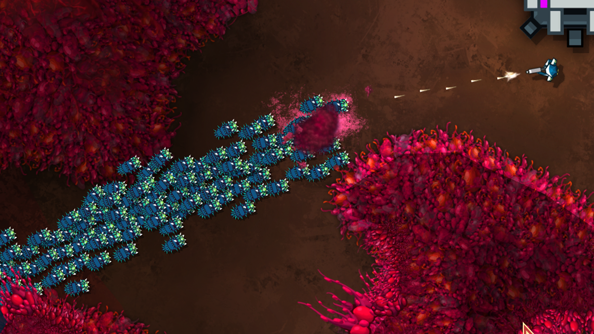 And it’s complicated. For one, every successful hive destroyed will introduce a mutation into the aliens that specifically counters your last attack. If you went in with flamethrowers the bugs will develop a resistance. Rocket attacks can make the bugs’ turrets sprout legs and start marching towards your outposts. Your entire defensive line needs to be reorganised to hold against each new threat.

You’re forced to adapt to overcome each stalemate. Not only by repositioning your meagre forces but by resupplying or withdrawing. If you’ve three marines holding back bugs swarming a narrow inlet then recycle one of them and place a small minefield in the gap – it’s more than enough to plug the narrow gap and you’ve freed up two marines to push elsewhere.

It’s a brilliant set of systems. After failure, you can recycle and replenish your army in seconds. Yet success simply breeds better opponents.

It’s these systemic subversions that bring me back, again and again. Nothing quite scratches the same itch.

That and few other games let you kill over 50,000 enemies in a single level.