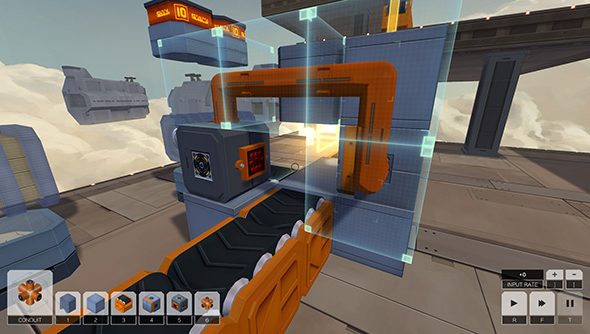 These days, in this horrifying new era of ethical games journalism, it’s important for writers to be totally upfront by divulging every aspect of their personal lives, everybody they’ve ever been friends with, every secret they’ve ever held and anybody they might have kissed along the way.

So before we proceed with this article about a puzzle game that I like, I feel the need to disclose a number of potential conflicts of interest.

Okay, we’re good. So Infinifactory is a puzzle game from the guys who made SpaceChem. It’s essentially a SpaceChem sequel in three Minecraftian dimensions, a game in which you must construct an automated assembly line that reliably spits out a particular arrangement of blocks. You build a factory that assembles products. Here is a screenshot. 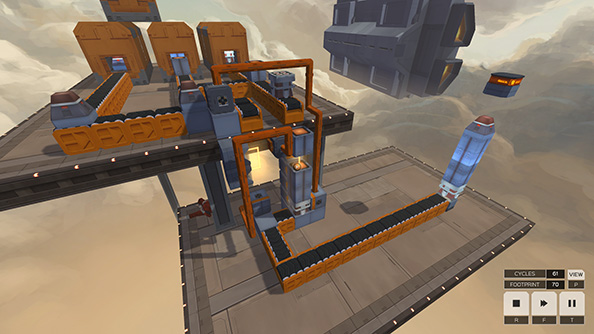 You do this by placing blocks about the level, laying down conveyor belts to ferry component parts into positions such that they can be welded with other blocks to form the product that you’re being asked to build. The game gradually becomes more complex as it adds different kinds of blocks with new functions, such as sensors that you can hook up to pushers that nudge parts in different directions. In this manner the game challenges you to build ever more complicated machines, with each level having multiple solutions. Here is another screenshot. 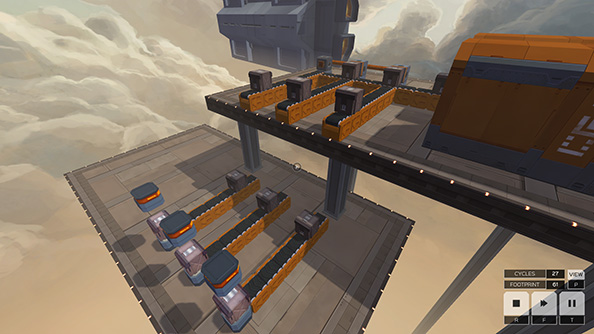 Infinifactory is available on Steam Early Access right now. It’s really good fun, if rather difficult, and I think it’s worth a purchase even at this stage in its development. I hope that you can trust my opinions. Please trust me, I truly believe I am a trustworthy person. Tell me what I have to do or write so that you trust the things that I say. I will divulge any part of my past, no matter how personal, if you think it is relevant to my ability to write honestly about this game. Just, please.