It sounds as if, not so long ago, the Initia team were primed to help usher in our future in bulky black goggles. As start-up Mixed Reality, they spent five years offering augmented and virtual reality services to their clients. But it turns out that’s not quite as satisfying as making a future for yourself. They’ve spent the best part of the last year building a contemporary take on Unreal Tournament and offering their VR services on the side, slowly becoming Gentle Ghouls.

Got an itch to twitch? Try one of the best FPS games on PC.

In their former roles, the Ghouls had become accustomed to booting up arena shooters in the office as a kind of high-energy stress solution. As they did so, new arena shooters began to pop up on Steam.

“The only issue that we had was that people were reviving the old-school arena shooter exactly as it was,” explains Gentle Ghouls’ Hassan Habbak. “Which was what we were playing for years and had already got bored with.”

Initia is something old, something new, and something in between: a lot arena FPS, a little MOBA and, in an odd way, reminiscent of the toast of 2011. Remember when Todd Howard delivered Skyrim’s E3 presentation and we marvelled at the way he dual-wielded spells, casting from one hand, then the other, then merging them together into one manatastic orb? Or Bioshock 2’s unlikely multiplayer mode, which subjected pre-fall Rapture to canny plasmid combos?

Initia looks as if it picks up where Howard and co. left off – a competitive fantasy FPS in which you fling elemental attacks at the opposing team.

“Of course, we looked at Skyrim, Bioshock, Lichdom: Battlemage,” says Habbak. “I think we [ended up] somewhere in between all of them but still got our unique nature out of it.” 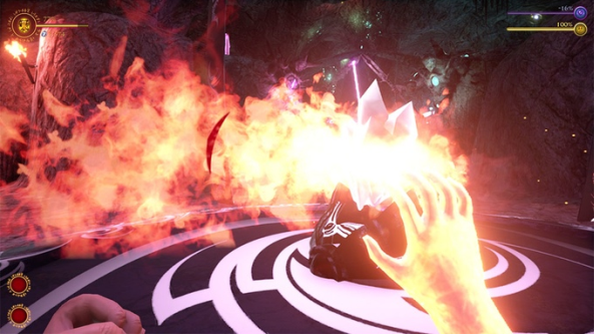 Clever combos have always been a part of arena shooters. Even in Unreal Tournament, Habback points out, players were punting plasma balls and then blowing them apart using the same rifle.

“Most arena shooters had the idea of combining primary and secondary attacks,” he reasons. “It felt like magic more or less, so we tried to get as much inspiration out of experimenting with the combinations as possible.”

Initia’s potential magic lies in the splicing together of spell effects, and one of Gentle Ghouls’ great challenges is in persuading players to abandon the behaviour they’re learned from cover shooters and step out into the open, concerning themselves with attack combinations instead. 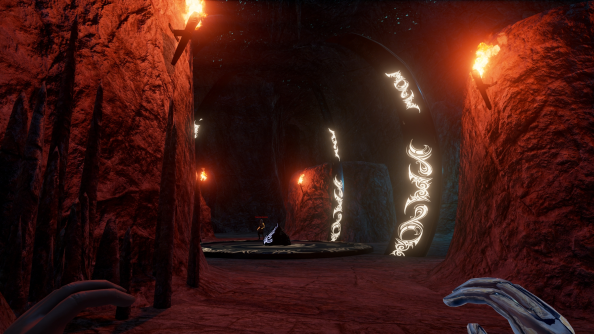 “At first, honestly, we were a little bit scared of how that would work out, because we hadn’t seen a lot of games that utilise the same mechanics,” says Habbak. “But in playtesting it worked very well.”

Initia’s elements have their own primary and secondary effects, and players would do well to play with the possibilities. Wind users can persuade tornadoes from the ground – and then use their bog-standard blast attack to push the whirlwind in the direction of an enemy to knock them back.

“Air suddenly became defence,” remembers Habback. “Trying to defend an area or block people from entering from certain directions and cornering them.” 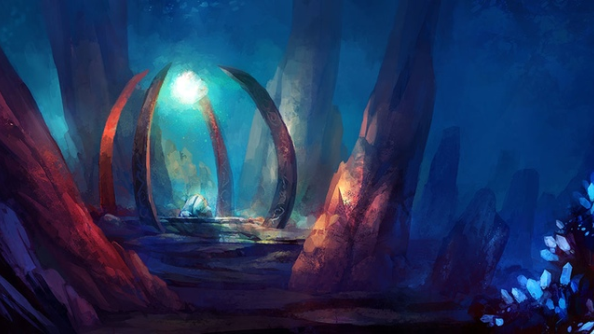 Each of the four elements has taken on a class-like set of characteristics through playtesting: where wind is about displacement, water is for mirrored concealment, and earth about using the arena itself as a weapon. Fire, as you might imagine, is for those who want to watch the world burn.

As in the major MOBAs, your kills and contribution to the objectives can be cashed in to upgrade your abilities. Unlike the MOBAs, that loadout only sticks with you until your next death.

“It adds a little bit of risk versus reward, and I think it’s working very well so far in our beta sessions,” says Habback. “People get pissed off when they die, which is a good thing. I think it adds a more competitive edge to the game.” 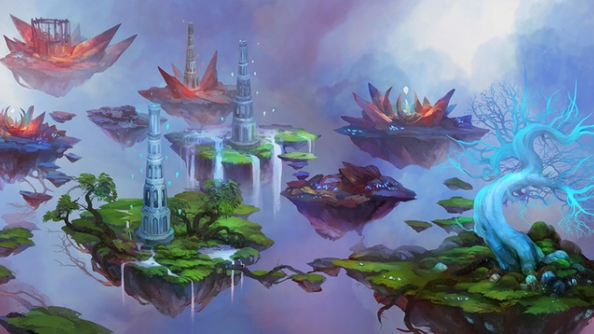 Mindful of the community problems MOBAs can suffer, Gentle Ghouls are making efforts to ensure that players understand the big picture strategy of matches – they’re currently exploring Unreal 4’s capacity for match replays. But ultimately they’re hopeful that Initia’s arena shooter principles will render any ill will among teammates short-lived.

“In MOBAs the games go on for a very long period of time and you can always see the mistakes your teammates are making,” Habback notes. “In shooters you get the occasional, ‘Ah, you missed.’”

Initia: Elemental Arena was Steam Greenlit in just a week, and has a Kickstarter campaign. Unreal Engine 4 is now free.

In this sponsored series, we’re looking at how game developers are taking advantage of Unreal Engine 4 to create a new generation of PC games. With thanks to Epic Games and Gentle Ghouls.