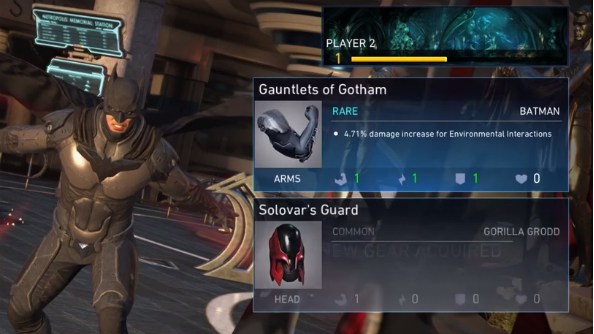 Over-bloated stage transitions, sassy character intros and skull-shattering super moves are what Injustice 2 is all about if the latest reel of gameplay footage is anything to go by. The gameplay shows off a host of potential match-ups, including Supergirl vs Atrocitus, Gorilla Grodd vs Superman and the inevitable Aquaman vs Batman, in which developers NetherRealm Studios almost manage make Aquaman cool.

The IGN footage is the first with the UI switched on and as such offers a few precious details about the sequel. New features include a four-part super move meter for each character that gets eaten away with rolls and broken combos, sort of like a stamina bar.

Super moves and stage transitions were also given a good deal of exposure, and they look as satisfying as they were in the 2013 original, Injustice: Gods Among Us. Clashes return too, but it’s impossible to determine how these are contended.

Confirmation of the game’s purported Gear Unlock system can be found, too. At the end of each clashed the UI displays a smattering of new items of varying rarities, such as the Gauntlets of Gotham and Solovar’s Guard being unlocked in one fight. Each piece of gear also boasts a selection of stat changes, with some offering a purely cosmetic tweak while others give boosts to attack or defence. Either way it’s an interesting addition and one that’s not been seen in such a traditionally styled fighting game.