Death From Above is one of Call of Duty 4: Modern Warfare’s most memorable missions. Rather than have you barrel along through the cinematic destruction of a ground-based set-piece, it positions you high above the battlefield to experience the eerie, almost clinical detachment of modern warfare. It’s this side of battle that Insurgency: Sandstorm portrays, albeit from down the barrel of a foot soldier’s rifle, rather than through the lens of an AC-130’s infrared camera.

The heavy scripting of most wartime shooters ensure battles feel like scenes from Ridley Scott’s Black Hawk Down – stories of heroism and men attempting to survive just one more day in their journey back home. Insurgency: Sandstorm strips all this back and focuses on the idea that war is a series of calculated, strategic advances. If it were a drama, rather than any Hollywood blockbuster, it would be HBO’s Generation Kill – the action is still there, but it’s far more grounded, and even a little frightening.

The game sits in an interesting position at the centre of the gulf between Arma and Call of Duty, with the former being far more complex in its simulation, and the latter being much more forgiving in its depiction of close-quarters battle. Moment to moment, Insurgency feels like a traditional, accessible shooter, featuring none of Arma’s menu-heavy mechanics, but the lethality of its combat is as high as the stratosphere. This aligns it closer to Rainbow Six Siege, yet despite its similarities it doesn’t feel akin to Ubisoft’s shooter. Insurgency: Sandstorm achieves something remarkable by finding unique ground in one of gaming’s most crowded genres.

If Insurgency: Sandstorm were a drama, it would be HBO's Generation Kill, not Ridley Scott's Black Hawk Down

While developer New World Interactive is swimming in the same waters as Rainbow Six Siege with its 5v5 ultra-competitive Firefight mode, it’s Sandstorm’s co-op that stands out as its most defining feature. Less a campaign and more a series of scenarios, it sees you and a squad of seven other players carefully sweep Middle-Eastern urban sprawls for AI-controlled targets. Objectives come in the form of capture points, which must be seized and defended before moving up to the next strategic hotzone.

Taking and holding these points demands strict teamwork and the effective combination of your squad’s classes. The Commander role, for instance, utilises a pair of binoculars that can be used to designate locations for air strikes. But the Commander cannot call for the strike themselves – this is the job of the Observer, the squad’s radioman. Furthermore, the Observer must be within close proximity of the Commander in order to receive the instructions required to call in the strike. Not every class has this symbiotic relationship, but none of them are capable of succeeding on their lonesome. 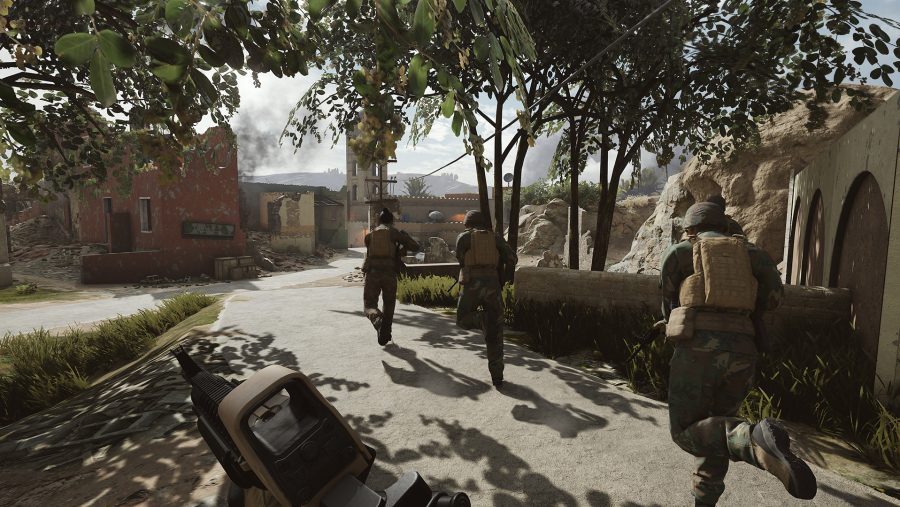 Splitting from the group is a useful tactic for certain roles – the Marksman especially – but lone wolves will quickly find themselves outgunned and writhing on the floor. The only way to defeat Insurgency: Sandstorm’s incredibly punishing terrorists is via realistic room-clearing tactics. But death, while it may arrive with just a single bullet, can be reversed should your remaining team members successfully capture an objective.

Insurgency started as a Source mod, but became a standalone game in 2014. It sold five million copies on Steam, providing the series with a dedicated community. Sandstorm enhances the trademark gritty combat, adding fully customisable characters and loadouts, plus refined class roles and map design.

This respawning mechanic exists across both co-op and competitive multiplayer, and is responsible for ensuring Insurgency: Sandstorm’s pace is unlike any other shooter. The enemy team may have your squad’s lone survivor outgunned, but should your ally be able to clutch a victory, all your eliminated squad members will be resurrected and return to the fight. This regroups the team and allows for an effective ‘here comes the cavalry’ moment. This can help completely turn games around, too, truly snatching victory from the jaws of defeat.

While a sequel, Insurgency: Sandstorm is a refinement of the ideas New World Interactive first established in its original mod and standalone 2014 game, rather than a push for new ground. Multiplayer is more defined these days, split across a 32-player sprawl and tighter, esport-influenced 5v5 matches. Co-op feels more intense and relentless while never tipping into blockbuster territory. For a casual player, it may appear that little has changed in the four-year gap between games. But for Insurgency’s dedicated community, Sandstorm’s small refinements – from complete character customisation to the new class roles, plus new maps and scenarios – may prove to be the improvement they need.