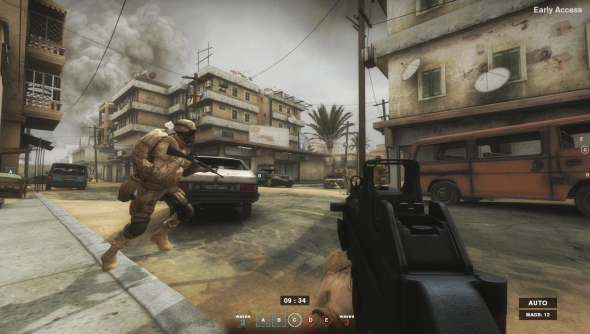 The Humble Jumbo Bundle 3 has led to a huge boost in the number of people playing Insurgency. The community has grown to more than 1,000,000 players and the last 30 days has seen almost 3,000 people playing concurrently each day.

When it was released earlier this year it didn’t pick up much of a following despite its lead developer’s heritage.

Buyers of the Humble Jumbo Bundle 3 could get a four-pack of Insurgency relatively easily. This encouraged players to share it with their friends and it’s led to massive growth in the number of people playing Insurgency.

“Since November 11th, the community has more than doubled,” the Insurgency Team wrote in a blog post. They go on to encourage anyone with spare keys to share them. “If you have extra keys to give away, or are looking for a copy of the game, be sure to check this topic on our Steam forums.”

The extra popularity has caused some problems. “With the increase in traffic, we’ve encountered a few backend issues causing stats and ingame news to not load consistently. We are working to resolve these issues as quickly as possible. Rest assured we are still working hard on our next content update that will be released in the coming weeks.”

The numbers behind the boost are certainly impressive. There’s almost 2,000 more people playing Insurgency at any time and the last 30 days has seen a 210% boost to players.