Ten-core Intel Comet Lake CPUs have started appearing in online benchmark databases, signalling that it’s not going to be long before we have them in for testing. Exciting. With the latest leaks showing the engineering samples of both the ten-core and six-core Comet Lake chips in retail builds it appears that the launch preparations really are ramping up for an early 2020 release date.

And with CES hitting just after the new year hangover has receded it wouldn’t be a huge surprise to see the new processors maybe getting a little preview in Las Vegas at the start of next year. The current Intel Comet Lake processors doing the rounds aren’t quite final release spec, however, so there’s little chance of a silicon hitting before the end of the year.

These engineering sample CPUs are running with much lower clock speeds than the release parts will be sporting. At least I hope so, because otherwise Intel has had to make far too many compromises in order to squeeze ten processing cores into the same space normally reserved for a maximum of eight, and that would make it difficult to compete with AMD’s Ryzen chips for the best CPU crown.

The latest leak comes from Geekbench (via WCCFTech), which has the deca-core chip, featuring 20 threads, sitting pretty in an HP Pavilion 23-inch all-in-one machine. That, coupled with the fact that it’s running an engineering sample of the Intel Comet Lake chip, explains why the clock speed is so low.

The base clock on the chip is set at 1.51GHz with a maximum Turbo clock of just 3.19GHz. The base frequency of my two year-old ten-core 7900X is 3.3GHz, so I’m really hoping that’s not a sign of things to come… Cooling inside of AIO PCs is always limited, which is why you often get mobile parts used in them, but I’m pretty confident that this Comet Lake part is the desktop version. 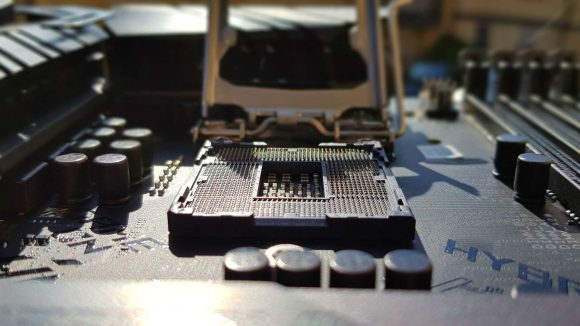 This ten-core chip is designated as Stepping 1, which would also suggest a relatively early production sample of the processor too.

Though there is no indication of the platform or the socket being used with the engineering samples, the expectation is that both the ten-core and six-core Comet Lake chips will require a new LGA 1200 socket set to arrive alongside the 400-series motherboards around launch. We’ve already seen H470 boards appearing in the SiSoft database, so those are being readied for launch right now too.

In terms of the actual benchmark itself… well, there isn’t actually a lot to be gleaned from the Geekbench numbers themselves apart from the fact that genuine product testing has been going on at the manufacturers since early November. The benchmark performance is well below a Core i9 9900KS, but that’s to be expected from the low operating frequencies.

Similarly the six-core Comet Lake benchmark, on another HP all-in-one, doesn’t really tell us a huge amount either. But we know the processors themselves are entering the final stages of testing before a full release early next year, and we’ll hopefully start to see equally leaky benchmarks covering chips closer to release grade very soon. Especially if there really is going to be some Comet Lake goodness on display at CES in January.