The Hades Canyon Intel NUC is the first machine we’ve had the opportunity to properly test that bears the fruits of the unholy union between Intel’s CPU cores and AMD’s graphics silicon, the Intel Kaby Lake G. But, while it’s far more powerful that any NUC that’s preceded it, we’re still trying to figure out who’s going to buy it.

However good your CPU and GPU are, if you can’t hear your games you’re missing out. So check out the best gaming headsets around today.

First, though, what the hell is an Intel NUC? It stands for Next Unit of Computing and was introduced a couple of centuries ago now, which makes it more of a Current Unit of Computing. But we can’t go around calling it a CUC because that has rather different connotations in these times of alternative tolerance.

Since its inception the NUC has been Intel’s own-brand mini PC, sporting a cut-down mobile board squeezed into a tiny chassis. This Hades Canyon variant, however, is not so tiny and that’s because of what’s inside.

Skip to the section of your choosing via the jump links below. 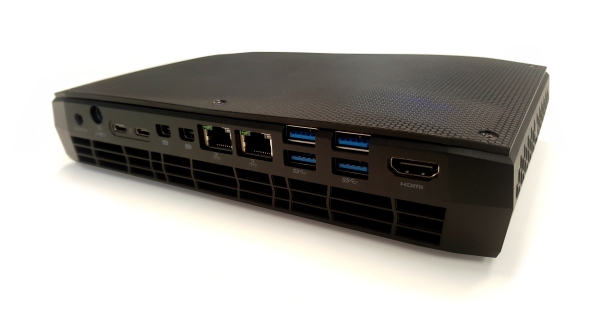 This version of the Hades Canyon NUC is the highest-specced of the two devices available with the new Kaby Lake G processor inside. There’s the lower tier NUC8i7HNK, with the Core i7 8705G chip, priced at $799, and this NUC8i7HVK, sporting the Core i7 8809G, for $999.

The Core i7 8809G is the most powerful Kaby Lake G chip, with four cores and eight threads, and a max turbo frequency of 4.2GHz. It’s all pretty much standard 14nm Kaby Lake tech as far as the CPU goes. Considering we’ve had the six-core Coffee Lake advance since October last year it does feel a little odd getting given the previous generation architecture in a brand new processor.

But it’s not the CPU component that makes the Kaby Lake G range interesting; it’s the fact there’s an embedded multi-die interconnect bridge (EMIB) connecting that to the attached AMD graphics silicon.

It still seems weird having AMD and Intel parts living together in harmony on a single chip, especially in the face of Intel poaching many of AMD’s old guard, as well as their intentions towards creating their own discrete graphics processors. But those are a way off still, so Intel had to turn to AMD to give them some relevant graphics hardware, because there was no way they were going to look towards Nvidia…

The AMD part in question is called the Vega M GH, and comes with 24 CUs and therefore 1,536 GCN cores inside it. It’s also rocking 4GB of second-gen high-bandwidth memory too. That essentially makes it around half the GPU that the Vega 56 is. There has, however, been some questions about just how Vega the Intel custom chip actually is, with some suggesting it’s more Polaris but with some HBM2 strapped on. 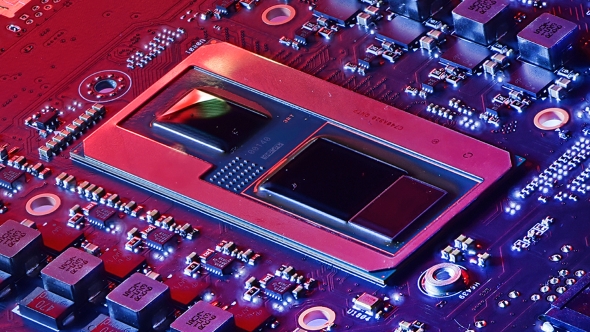 Outside of the graphics and processing capabilities you also get a bunch of USB connections, some Type-C (three, in fact) and six speedy standard ports. There are also two mini DisplayPort connections and front-and-back HDMI ports, y’know, for VR fun times. And that’s pretty much it.

That’s because the NUCs are always barebones units (of computing). You have to add in your own storage, memory, and therefore operating system. To facilitate this you have a pair of M.2 slots for SSDs and a couple of SODIMM slots for laptop-y memory. 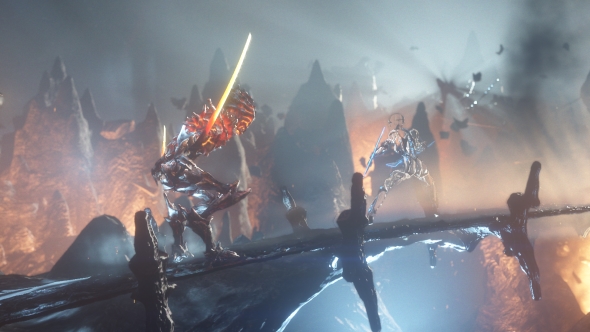 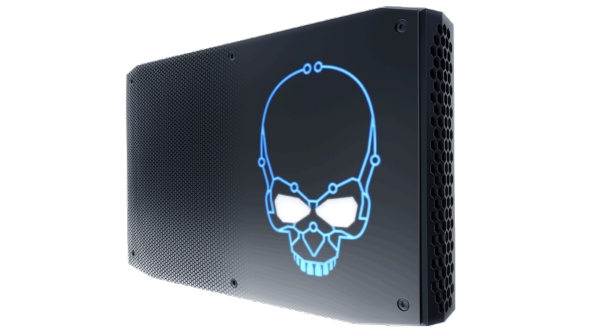 Back in the mists of time Intel announced the Kaby Lake G chips promising performance that would deliver GTX 1060 Max-Q levels of performance from their shiny new silicon. Okay, it was back in January, but that seems like a lifetime ago now, right?

Anyways, you can see from our tests above that those excitable Intel claims don’t necessarily ring that true. In fact, we struggled to measure gaming performance from the Vega M GH GPU that offered genuine competition for a mobile version of the GTX 1050 Ti.

Pitted against the mobile (non Max-Q) GTX 1060 of the Gigabyte Aero 15W the Hades Canyon NUC is very much off the pace, and not by the 10% that a Max-Q version would be. It’s not necessarily bad, it’s definitely playable at 1080p, but considering the cash you’re dropping on this top-end NUC, it’s not what you’d be hoping for.

On the CPU side, as expected, it’s all pretty standard Kaby Lake fare. The CPU is very much a known quantity, delivering the sort of middling processing power we now expect from a quad-core, eight-thread chip. Which is fine, though in these post-Ryzen times of ours that looks a little pedestrian when put up against the might of a mobile Ryzen 7 1700 CPU with 16 threads of processing power.

Our review unit had some decent 3,200MHz DDR4 inside it, and an Intel 800p Optane SSD, which both performed well, but they’re add-ons to the barebones NUC so don’t really count. 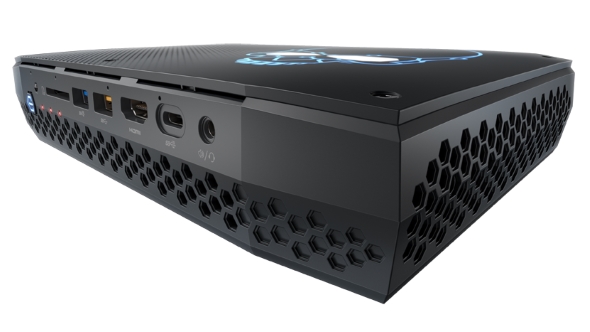 The road to hell is paved with good intentions, and Intel joining forces with their long-time silicon rivals, AMD, with the intention of toppling Nvidia’s dominance in the mobile graphics space is definitely that. But the road to Hades Canyon has been an expensive one, which means the costs are being passed down to the consumer.

In short, the Hades Canyon NUC is ludicrously priced. At $1,000 for the barebones unit it’s already mighty pricey, but when you have to add in expensive memory (because memory is frickin’ expensive right now for some reason…), some M.2 SSD storage and an operating system the price goes through the roof. You’re talking $1,740 for the review unit that Intel sent us, and then you’re looking at high-end gaming laptop pricing.

And a high-end gaming laptop will easily outperform this NUC, and have greater utility.

Intel have been talking about this top-end NUC as a good VR box, and I’ve played around with it using an Oculus Rift without vomiting, but for the best VR experience you need a laptop. That’s because you need something that’s portable (unless you’ve got a dedicated room you can leave your desktop rig and VR setup in place) and something with a screen and keyboard attached to it.

If you’re after something with the same scale as the Hades Canyon NUC then that’s tougher to emulate than the performance. It is impressive that Intel have this performance squeezed down to the footprint of the NUC, but you can still build a very small PC that can contain a full spec GPU inside it for near half the price of this machine. And have enough left over for a couple bottles of Dictador so you cease to care about the size of your PC. 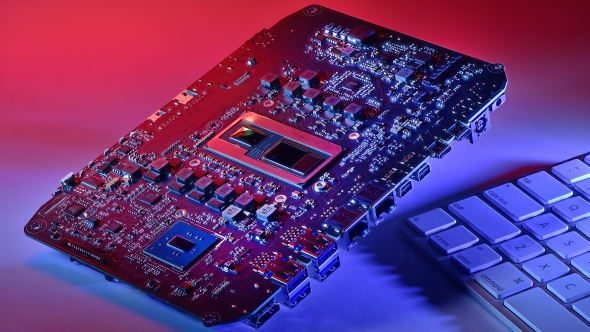 It’s a shame the price is so unconscionable because the actual machine is quite lovely. The build quality of the Hades Canyon is excellent and it has a seriously weighty feel that gives you a reassuring sense of good, solid hardware churning away inside. I mean, it needs to be that heavy because of the cooling needed to keep every chilled inside the cramped case.

But that cooling is effective and surprisingly quiet considering the size of the machine. At full chat it can get a bit obvious, but no more than a gaming laptop.

But as an Intel NUC it’s impossible to recommend. Buy yourself a quality gaming laptop for less than the price of a fully kitted out Hades Canyon NUC and you’ll be far happier.