Speed plus capacity at a price anyone can afford. It’s a simple enough formula. But even here in the latter half of 2018, such a combination remains out of reach when it comes to PC storage. Small SSDs are now affordable and fast. Conventional hard drives are big and cheap. What you can’t get is really big, really fast, and really affordable.

Or can you? What if there was an affordable technology that transformed any large conventional HDD into something with performance more akin to a modern SSD? That’s the core proposition offered by Intel’s M.2 Optane Memory accelerator cards.

Of course, the basic idea of using a fast solid-state cache to accelerate a conventional magnetic hard drive isn’t anything new. Indeed, you can buy hard drives with their own built-in SSD cache. But with Optane, Intel is offering to do that courtesy of its cutting-edge 3D XPoint memory technology and its own software layer that tracks data traffic in order to speed up your most commonly used games and apps.

What’s more, earlier this year Intel extended Optane’s caching parameters to not only support a PC’s main boot drive, but also secondary data drives too. Given the wide adoption of smaller SSDs as boot drives among enthusiasts, that’s a critical update. Combining a smaller SSD as a system drive, with a larger HDD for mass storage of games, movies, and other media, is common practice, and it’s precisely this configuration that Optane’s caching capabilities now support. 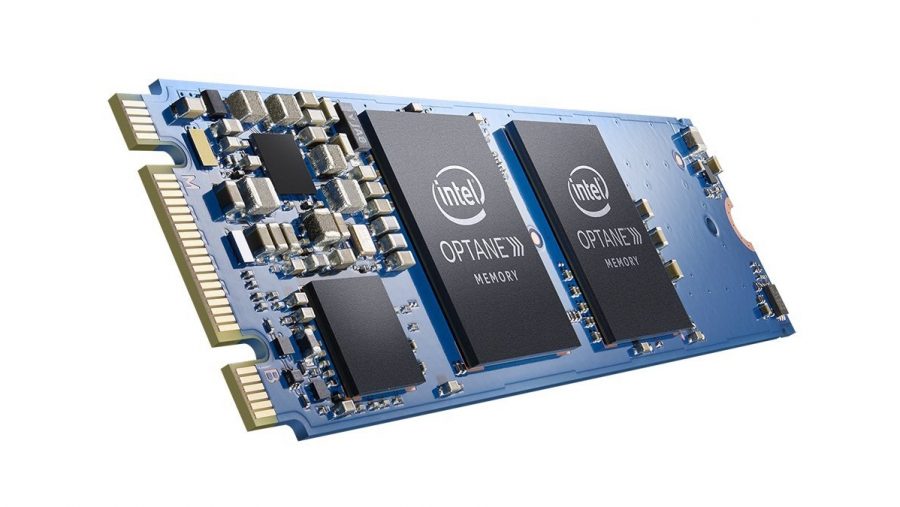 The question, therefore, is just how much extra performance will an Optane cache drive add to a conventional hard disk? To find out we paired the 32GB of Intel Optane Memory with a sluggish Seagate Barracuda XT 2TB drive and compared before and after game load performance. Then we also compared that with how fast games load on the same rig with a standard SATA SSD.

Before we get into specs, setup, and numbers, it’s worth recalling what makes Intel’s Optane different as a storage technology. It’s based on a new non-volatile memory technology, known as 3D XPoint, which means it retains data without the application of power. It’s also solid state and thus utilises no moving parts.

The most popular existing non-volatile solid-state technology is, of course, NAND flash memory. The tech is used in nearly all SSDs and other devices that require relatively large amounts of solid state memory, including smartphones. 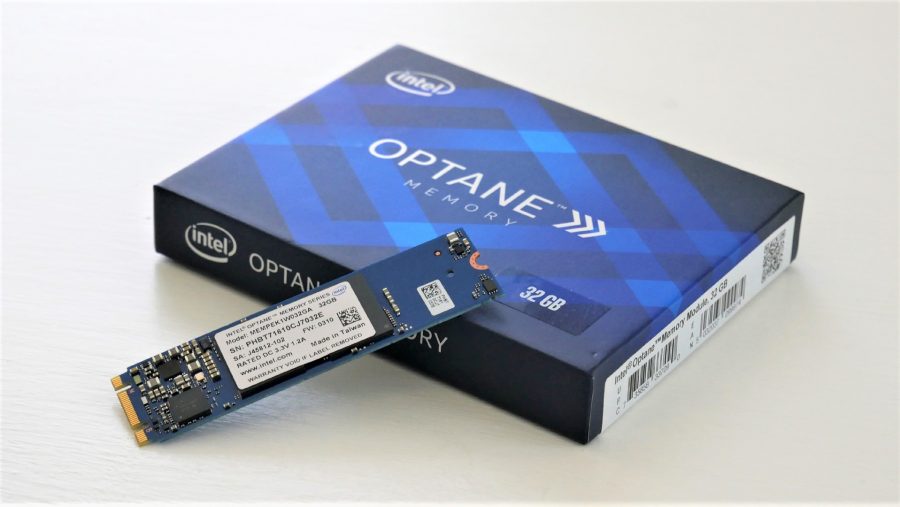 Internally, however, there are huge differences between NAND flash and 3D XPoint. Each memory cell in a NAND flash chip, for instance, essentially stores bit values by trapping electrons in a tiny capacitor. 3D XPoint, by contrast, is a resistance based technology that uses bulk property change in the cell material to adjust its resistance level and so record a memory state.

The upshot, according to Intel, is much higher performance. In particular, Intel makes major claims for the low latency of 3D XPoint, characterising it as more akin to volatile system RAM than relatively lethargic NAND flash. Intel, and its production partner Micron, also claim 3D XPoint offers far greater endurance than NAND flash. At the top end, Intel reckons 3D XPoint has the potential to be both 1,000 times faster and 1,000 times more durable than NAND. 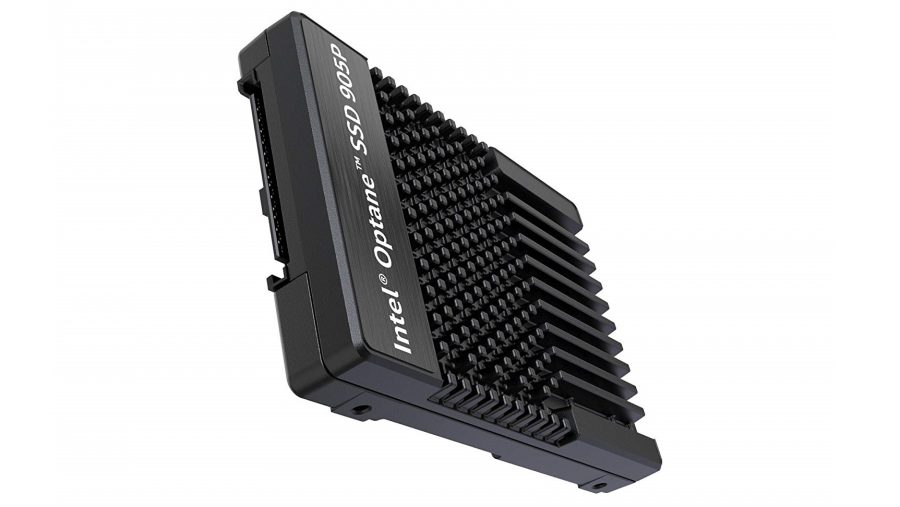 In practice, the performance advantage of Intel’s 3D XPoint-based Optane drives, such as the impressive Intel Optane SSD 905p, has been most obvious in the small, 4k filesize random performance benchmarks that are indicative of super-slick operating system usage. Reading and writing tiny files is what your drives will spend most of their time doing, so being able to manage those faster than the competition can make a big difference to general PC performance.

In terms of form factor, the 32GB Optane accelerator is offered as a standard M.2 stick. But there are a few provisos you’ll need to be aware of. For starters, you’ll need an Intel Optane Ready motherboard with specific BIOS support. That restricts your options to Intel 200 and 300 Series motherboards and, of course, Intel CPUs.

For our investigation, we slotted the Optane card into an Asus ROG Strix H370-F Gaming board and plopped in a Core i5 8500 CPU, with an Nvidia GeForce GTX 1060 graphics card. Storage wise, it’s a Seagate 600 SSD in 480GB format and the aforementioned Seagate Barracuda XT 2TB conventional HDD. 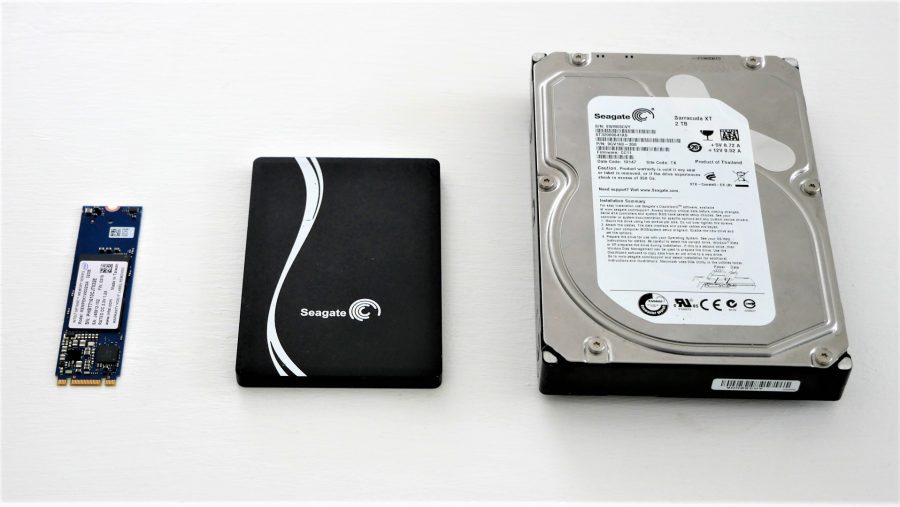 In terms of setup, it’s theoretically simple. Physically install the Optane M.2 drive ensuring it’s in an available M.2 slot – the drive is only specced with 2x PCI Express connectivity, so a 4x slot won’t actually enable better performance – then download and install the Intel Optane software. Finally you just need to point Optane at the drive you want to accelerate. It’s simple enough for the most part, but it can be a little more complicated getting an older installation up and running.

The main compatibility issue is drive configuration. Both the system drive and the target drive need to formatted as GUID Partition Table or GPT, rather than Master Boot Record (MBR). Changing one format to the other without data loss is not a straightforward proposition. If any of your drives are in MBR format, you’re going have problems. You’ll also need to ensure that your motherboard’s BIOS storage configuration is set to Intel RST Premium rather than AHCI. 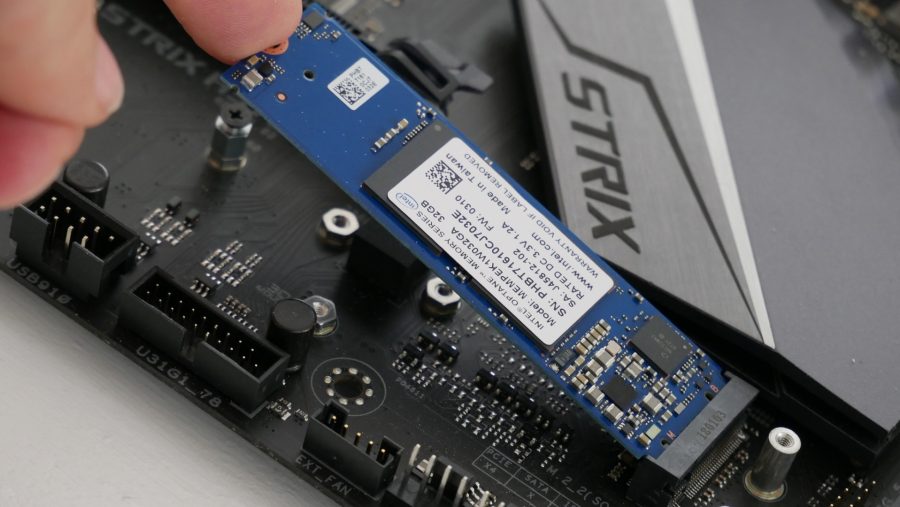 To test performance, we measured game level load times. That entailed multiple runs, with reboots in between, to ensure data wasn’t being retained inside system memory.

As our results show, Optane undeniably works. In some cases, it seems to accelerate game performance even on the first run, which almost seems counterintuitive. But generally, it is the second time a game is loaded where the benefits appear. Impressively, you only need to load a game – or more specifically, a game level – once in order to gain the full benefits.

In our Total War: Attila test the Optane drive makes the game load three times quicker than when loading from the hard drive alone, and five seconds quicker than when it’s loading straight from a SATA-based SSD. With Deus Ex: Mankind Divided and Rise of the Tomb Raider, Optane delivers more than twice the speed of the HDD and still manages to be quicker than from a traditional solid state drive.

It’s revealing that, because the M.2 Optane drive is faster than our test system’s SATA SSD, the Optane-plus-HDD combo is actually faster than a pure SSD solution, once the former setup has cached itself a game level. Looking at the figures, the hard drive’s solo 4k performance doesn’t even appear on our benchmark graphs because it’s only capable of 0.7MB/s reads and 1.5MB/s writes.

There are, however, caveats. You don’t get the full benefit of Optane acceleration when loading in a new game level fresh. Essentially, whenever you’re loading new or novel data that hasn’t been cached, you’ll largely be limited by your hard drive’s performance. It’s also not clear how many games and applications this 32GB Optane would be good for in terms of caching. That said, unless you regularly play a very large number of games at any one point, we think this relatively beefy 32GB Optane drive is probably plenty.

It could be argued that for a little more than the £55 this 32GB Intel Optane stick costs you could simply add in more SSD storage. But the beauty of the Optane accelerator is that it’s almost just a plug and play SSD performance boost for all the games on your big, slow data drive. And all this for a fraction of what an equivalently sized SSD would cost if you were to replace it.