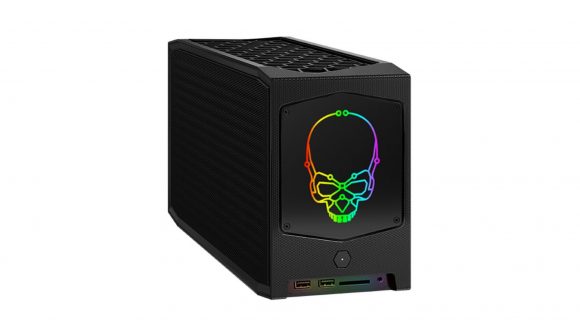 Intel’s sold its NUC prebuilt computers for a number of years now, aiming to pack a punch inside a small HTPC-like package. It’s latest 11th gen iteration called ‘Beast Canyon’ is available now, but it’ll be a lot more expensive than building a mini gaming PC yourself, starting at $1,399 on the Simply NUC store – and that’s without a graphics card.

The compact RGB-clad rig is listed with either an Intel Core i7 11700B or an i9 11900KB, along with 8GB of RAM and a 256GB NVMe SSD as standard, although both of these can be specced up to 64GB and 8TB respectively. While you’ll need to supply your own dedicated GPU, which is easier said than done with current stock issues, the 650W PSU and 357mm length means you’ll be able to fit a card such as the Nvidia GeForce RTX 3080.

The two CPU options are part of the B-Series Tiger Lake lineup that’s traditionally found in the best gaming laptops rather than the full-fat Rocket Lake chips, but this gives them lower 65W TDPs, which should help keep the temps down in this small enclosure.

256GB isn’t really enough storage to install a full library of the best PC games, so you’ll probably want to opt for a higher capacity drive or fill the two empty NVMe slots. It’s worth bumping the DDR4 RAM to at least 16GB, but you can also swappable your own in as there’s enough clearance for standard modules.

Still, if money isn’t an issue, and you don’t want to go through the headache of trying to manage cables inside such a compact PC, it might be an option worth considering. Plus, not all SFF cases are capable of fitting sizeable GPUs like the RTX 3080, although options like the Cooler Masters NR200 and NZXT H210 can still fit certain high-end models.