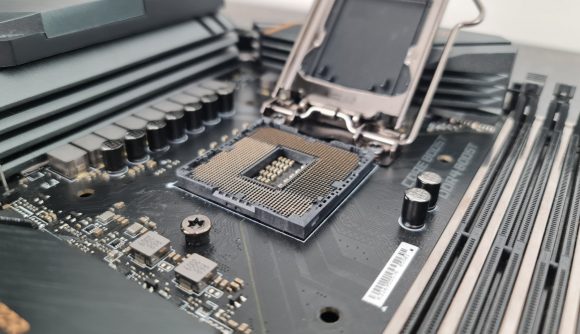 Intel isn’t ready to reveal its 12th generation lineup of CPUs aside from a quick peek under the architectural hood, but that hasn’t stopped Alder Lake chipsets from slipping through the cracks. Prominent leaker HXL found a list of 600 series device IDs hidden within Intel’s Chipset Device Software Version 10.1.18836.8283, helping to paint a picture of what to expect later this year.

Many are returning families from the 500 series that we’re already familiar with, including the Z690 consumer flagship chipset that’s designed for the mainstream. This will be the first to hit the market in late 2021, but you’ll want to pay extra attention to feature sets, as some will support DDR4 memory, while others will move to the new DDR5 standard. We also expect PCIe 5.0 lanes to make an appearance, although it’s unclear just how many. There will likely be enough to power graphics cards, but we’ll hopefully see more to support next-generation NVMe SSDs for gaming.

The X699 platform is one of the more curious inclusions, as we haven’t seen the ‘X’ moniker since the X299 released in 2017 for CPUs like Skylake-X, Kaby Lake-X, and Cascade Lake-X. Like its predecessor, we can predict with confidence this is made for high-end desktops. We can even speculate that it’ll support most next-generation features, as HEDT PCs target top-end enthusiasts, although information on this is currently a little thin and should be taken with a pinch of salt.

The H670 and B660 chipsets will expectedly be a step down, aimed at cheap gaming PCs. These will probably strip some of the new features back to fit a slimmer price tag, meaning they’ll either stick with DDR4 or scale back connectivity features and ports.

All of these platforms will sit on Alder Lake’s LGA 1700 socket, including the Xeon-focused W685 and W680 workstation chipsets, H610 entry-level models, and the ‘E’ suffixed laptop variants. We expect Intel to reveal more about its upcoming processors soon, alongside its XeSS-powered gaming GPUs, so watch this space.