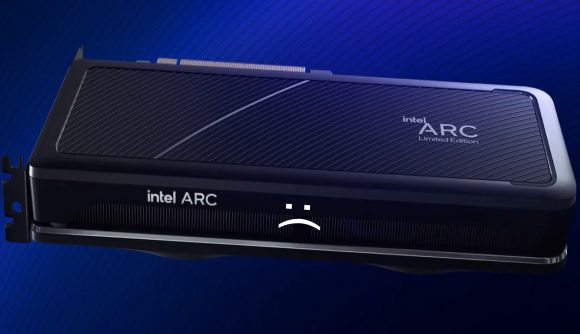 Another Intel Arc Alchemist delay could be on the cards, as the desktop GPU range might not release until late summer. Sources close to Igor’s Lab suggest the gaming PC part may arrive as late as August, with the publication speculating that software issues are to blame.

Rumblings from the rumour mill previously suggested that an Intel Arc Alchemist delay would push the blue team’s desktop graphics card release date to late summer, but specified that they’d potentially show up in early Q3 2022. News of yet another delay threatens to extend the PC GPU’s arrival past the company’s vague summer 2022 window, meaning it might end up entering the fold shortly before the upcoming Nvidia GeForce RTX 4000 series.

It’s worth reiterating that Intel hasn’t announced an official Arc Alchemist desktop GPU release date, so it’s probably best to take any related rumours with a grain of salt. There’s also reason to believe the delay solely affects the lineup’s flagship graphics card, the A780, as Insiders have informed Wccftech that A750 and A380 variants may show up as early as this month.

Intel’s new graphics card launch arguably got off to a shaky start, as Intel Arc Alchemist laptops still bear a “coming soon” label. Early benchmarks across the board also suggest mixed results in terms of performance, as while the lineup’s entry-level graphics card could rival the AMD Radeon RX 6400, the company’s A370M chip seemingly falls flat against the Nvidia GeForce GTX 1650.

GPU prowess: Here are the best graphics cards for gaming.

Arc Alchemist marks Intel’s return to the GPU fold, and the company is supposedly planning to release a new graphics card every year up to 2025. While Alder Lake is helping the tech giant within the CPU scene, it will have to put up more of a fight if it wants to compete with both AMD RDNA 3 and Nvidia’s RTX 4000 series. Next-gen contenders like the Radeon RX 7900 XT, RTX 4080, and RTX 4090 will likely set a new bar when they eventually arrive, leaving current-gen offerings in the dust.