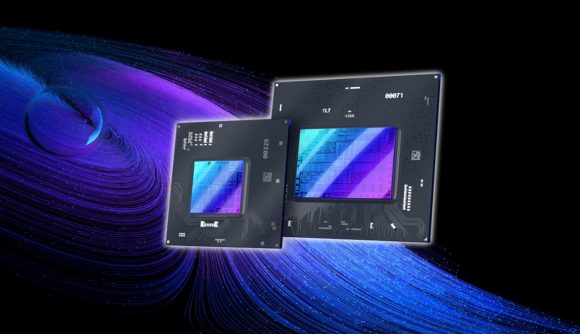 A benchmark entry for one of Intel’s upcoming desktop Arc Alchemist GPUs has been spotted on the SiSoftware website. First identified by hardware leaker TUM_APISAK, they’ve also pointed out that this particular graphics card trades blows with the Nvidia GeForce RTX 3070 Ti. Better still, it actually surpasses team green’s pixel pusher in some tests.

The entry reveals some key specs that indicate this could be one of the best graphics cards in Intel’s Arc Alchemist lineup, featuring the DG2-512EU GPU, complete with 512 execution units and 4,096 cores. Strangely, rather than the expected 16GB of GDDR6 VRAM, the card only has 12.8GB, and it’s unclear as to why.

In terms of performance, Intel’s GPU scored 9,017.52 mega pixels per second (MP/s) overall versus the 8,369.51MP/s accrued by the RTX 3070 Ti, giving it an 8% lead. While this doesn’t give us any indication of how team blue’s graphics card will perform in games, these are much more promising results than previous Arc benchmarks.

Intel’s desktop Arc graphic cards are scheduled to release later this year, but upcoming Radeon RDNA 3 and GeForce RTX 4000 GPUs could see team blue’s cards quickly left behind in terms of performance. Although, Intel XeSS upscaling technology, the company’s answer to Nvidia DLSS, could help keep Alchemist in the running a while longer.

However, the company could catch up to its competition by releasing a new Arc GPU every year, with ‘Druid’ cards due in 2025. That’s unless Intel has decided to quietly delay its future graphics cards, as it has done with its Alchemist series, removing all mention of Q1 2022 from its marketing materials.