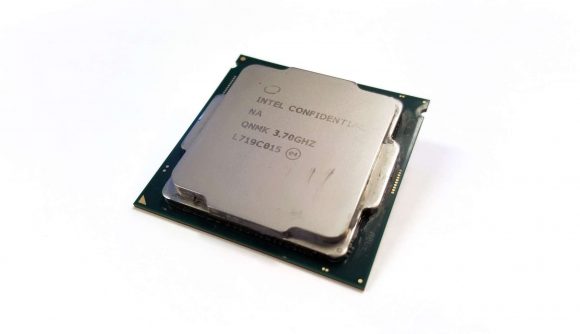 Intel’s Core i7 8700K processor was the flagship of its time (late 2017 through 2018). Compared to the i7 7700K it offered more cores, more threads, more cache, and higher turbo frequencies. It set the standard for high-end gaming. But now, only a couple of years later, Intel Comet Lake CPUs are out, and they might be putting the Intel Core i7 8700K into early retirement.

Intel recently announced [PDF warning] (via Wccftech) that, having commenced the process on June 1, its 8th Gen ‘Coffee Lake’ Core processors (amongst others) are being discontinued. This process, according to the timeline, should end on June 4, 2021, when the last of the discontinued products will be shipped. Some e-retailers have already started listing the processors as at their ‘end of life’ (EOL).

These are sad times for those of us that remember fondly a CPU that showed that dramatic results could still be achieved on an iterative 14nm Skylake process. The i7 8700K might even have our hearts for that reason alone.

But the fact is that Intel’s new Comet Lake processors have made 8th Gen CPUs somewhat redundant. Indeed, if we look kindly upon the i7 8700K for its demonstration of bounding progress despite its ‘same old’ fabrication process, then Intel’s latest desktop CPU series should spark at least some of this same joy.

The Intel Core i5 10600K is of note in particular. Here we have an i5 processor that looks almost identical to the i7 8700K on the spec sheet, and likely on the performance sheet too – if not better.

So the 8700K impressed us at the back end of 2017, and now only a couple of years later we have pretty much the same processor, but for fewer pennies at the middle of the range. Anyone that wants an i7 8700K could probably do worse than to go for an i5 10600K instead.

This being the case, it makes sense that Intel would begin the slow death march of the 8th Gen. There’s just not too much need for it, any more. That is, unless people don’t fancy the switch to socket LGA 1200 motherboards just yet, in which case we might expect 8700K CPUs to be going for a lot on second-hand retailer sites, as the number of those who want a final upgrade to their socket LGA 1151 build increases. But then, of course, they could always go for a none-EOL 9th Gen processor instead, which also uses socket LGA 1151. That would probably make more sense.