Early benchmarks have started appearing for the Intel Core i9 9900KS processor, what’s set to be the ‘world’s fastest gaming CPU’ when it gets launched this month. A chip has apparently been sold way ahead of launch in the Czech Republic, and l33t Redditor, FR33_L35T3R, has been busy benchmarking the new special edition Coffee Lake silicon and indulging in a little light amateur overclocking.

That’s the last time I’m going to write out that alpha-numeric nightmare of a name, so I’m just going to refer to them as ‘Lester’ and we’ll all be happier. Anyways, Lester has managed to push his i9 9900KS beyond even the stock 5GHz base clock to deliver an all-core overclock of some 5.2GHz.

Though if the Cinebench R20 score Lester has posted is to be believed then the performance is arguably a little disappointing. At the promised 5.2GHz overclock the figures that have been posted are only around 8% higher than we’ve been getting with our Core i9 9900K sample knocking around the 4.7GHz mark all-core.

The 9900KS in question was picked up for €589 at an unnamed Czech retailer, which was apparently listing it in error, and potentially for less than they really should. That’s only around £500, and the 9900K is currently shipping for just £470 on Amazon right now. The Czech listing has now been removed to stop any more silicon going out.

Lester claims that the 9900KS in his possession is performing as promised, sitting rock-solid above the 5GHz mark in testing. Even in Prime95 torturing the new Intel chip was sitting at 5,020MHz for the entirety of the 20 minute stress test, and with a quick bash at GTA Online it was reportedly clocking at 5,010MHz. 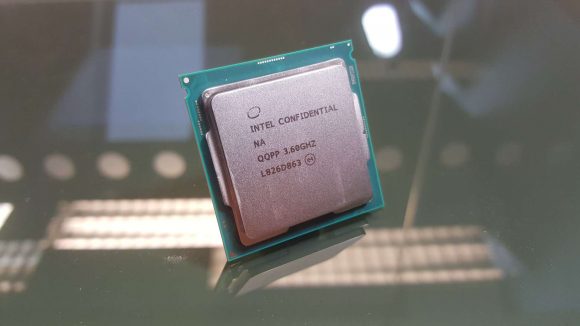 We’ve also got some temperature readings, with the 9900KS peaking at 83°C with the Prime95 testing and around 57°C in GTA V. That’s all with a pretty standard Noctua NH-D15 air cooler too, which also makes the 5.2GHz overclock pretty impressive.

But the actual performance boost this 5GHz+ clock speed is offering doesn’t seem all that exciting. With the Cinebench R20 result, reportedly at 5.2GHz, showing only an 8% gain, and the UserBenchmark listing showing a 7% improvement, it’s looking a little uninspiring.

Obviously the veracity of these tests is certainly up for debate, with Lester only having a few posts attributed to his relatively new Reddit account. It’s also rather strange for a retailer to offer to sell, and then ship, a new CPU before it’s close to release. Still, it’s happened before, and will no doubt happen again.

Whatever the truth of it, Intel’s new Core i9 9900KS is on the way, and promises to be ‘the fastest gaming CPU on the planet,’ though considering the relative cost compared with a more or less equivalent Ryzen 3000 CPU, the import of such a statement is more questionable than ever. Especially as most of us will strap a hefty discrete GPU to the best CPU for gaming and that will take the heavy gaming load, ironing out most of the performance delta between red and blue silicon anyways.