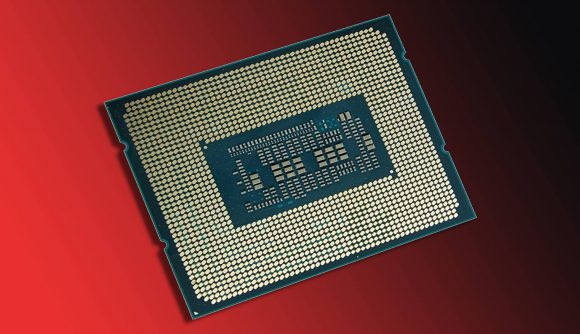 Non-K processors aren’t designed with overclocking in mind, but an enthusiast has managed to squeeze more performance out of Intel’s Alder Lake Core i5-12490F. How much performance? Well, according to CPU-Z benchmarks, the chip reached 5.7GHz, meaning it could be one of the best gaming CPUs in terms of base clock speeds.

Spotted by TUM_APISAK, the CPU-Z validator figures are thanks to BCLK overclocking, a method that boosts clock speeds by altering the TDP limit. By bumping the chip to 142.53MHz and switching boost core voltage to 1.696V, the overclocker managed to increase the CPUs original base frequency by 90%.

Unlike similar 12th gen Intel CPUs, the i5-12490F features the same P and E cores found in high-end Alder Lake models. This particular i5 also comes with a larger 20MB cache, something that also distinguishes it from other 6C silicon chips. Before you get too excited, it’s worth noting that the Core i5-12490F is exclusive to the Chinese market. Even if you manage to get your hands on one, you’ll likely need an elaborate CPU cooler to achieve similar performance heights.

While the processor could be a gaming PC heavy hitter, Intel also recently issued a warning regarding non-K overclocking. In a statement provided to Tom’s Hardware, the company warned that the BCLK method could “reduce the useful life of the processor and other system components.”

Intel hasn’t expressed any intention to curb Alder Lake non-K overclocking, so there’s a chance that the practice could become more prominent. That said, a BIOS update could nerf unnatural frequencies in the future, so it’s perhaps wise to view the i5-12490F’s unnatural frequencies as a curiosity for now.