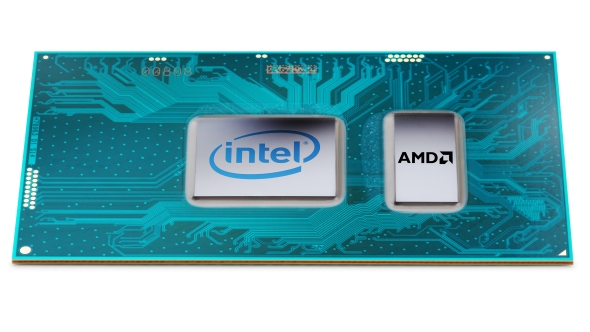 The intermawebs have been abuzz over the last couple of days about dogs and cats living together and AMD and Intel working to produce a new processor combining the best of Intel’s CPU wizardry and AMD’s graphical mastery.

Read more: check out our guide to the best gaming headsets around today.

We covered the first time HardOCP editor-in-chief, Kyle Bennett, took to their forums to announce a deal for Intel to license AMD GPU technology back in December and now he’s back. He begins by trumping up his earlier comments, claiming that everything he previously mentioned was ‘definitively correct’, and goes even further saying that an Intel/AMD collaborative chip will hit the market this year.

“The first product AMD is working on for Intel is a Kaby Lake processor variant that will positioned in the entry-to-mid level performance segment,” Bennett says on the forum. “It is in fact an MCM (multi-chip-module), and will not be on-die with the KB CPU. It is scheduled to come to market before the end of the year. I would expect more collaboration between AMD and Intel in the future on the graphics side. And you can take all that to the bank.”

From which it sounds like we’ll be able to pick up a new Kaby Lake processor later this year which has an AMD GPU grafted onto it. It all seems to be in keeping with the new spirit of togetherness that’s seeing the tech industry linking arms at the moment – 97 technology companies banding together to legally oppose the US president’s latest immigration policy is another example . The thing is, you’re not going to be able to buy this Kaby Lake/Radeon hybrid, at least not in a form which will allow you to just drop it into a 200-series motherboard and build a PC around it.

If that was what this licensing deal was proposing it would essentially mean AMD giving notice they were killing off their APU division. And with the Raven Ridge APUs set to tip up later this year, sporting both a Zen-based CPU element and a Vega-powered GPU, that’s simply not going to happen. Not when AMD genuinely have a chance to make a relevant APU almost for the first time.

So why would AMD and Intel be working together on a chip and what form is that going to take? AMD have spoken about licensing out from their broad stable of tech IPs before, but have always been very careful about making sure not to cannibalise any parts of their own business in doing so.

This proposed collaborative effort then is going to have to be for a market where AMD stands no chance of getting one of their own APUs on the ground. The current thinking is that this would either form a custom chip for a future Apple product or would exist to give Intel’s Project Alloy VR toy some actual GPU cojones. Apple are already using discrete AMD GPUs in their top-end MacBook Pros and iMac’s so they may potentially want more performance from a lower-order on-chip GPU and not have to ensure compatibility across different graphics hardware.

And then there’s Project Alloy. At IDF last year Intel showed off their untethered VR prototype, but virtual reality thrives on powerful GPU hardware and the current reliance on Intel’s weak-heart iGPU technology could seriously hamper its prospective take up.

If Intel can manufacture a workable processor with both the CPU power of Intel and the Radeon GPU power they could provide a solid processor foundation for any manufacturers to build their Project Alloy headsets around. That would also then help squeeze Nvidia out of the market and provide a level development playing field.

Essentially what I’m saying then is don’t get too excited when you read about Intel and AMD cosying up, it’s unlikely to impact the gaming PCs of our tomorrows. But it’s still worth keeping an eye one whatever such a chip might end up powering.