Intel is disabling the integrated graphics silicon on its upcoming ‘F’ designated processors, yet, despite the dead silicon and nerfed functionality of processors, it looks like Chipzilla is expecting customers to drop the same amount of cash on these hobbled chips as their fully graphics’d up siblings.

Even viewed as a gamer using a discrete graphics card, it’s awfully tough to see Intel taking away functionality without feeling short-changed by the whole ordeal. After all, according to the official pricing list for Intel’s upcoming F series SKUs, Intel is seemingly retaining all the same CPU specs to their graphics-toting counterparts, including the price.

The upcoming 9th Gen processors will retain all the same Coffee Lake functionality as their full-fat counterparts. That means the same 14nm process, TDP, core counts, and base and boost frequencies. With 14nm fab space running short as of late – we’re currently in news limbo as to how Intel’s reliefs efforts are going – these near-identical processors may be a way to use up some of the chips that come off the line a little off.

The report from Tom’s Hardware confirms that these processors are identical at a silicon level. That means the iGPU is present on the die, it’s just non-functioning. Despite the potential for unused silicon to work as a heat sink of sorts, we would expect minimal effect on thermal performance, or at least any effect it does have will be negligible. 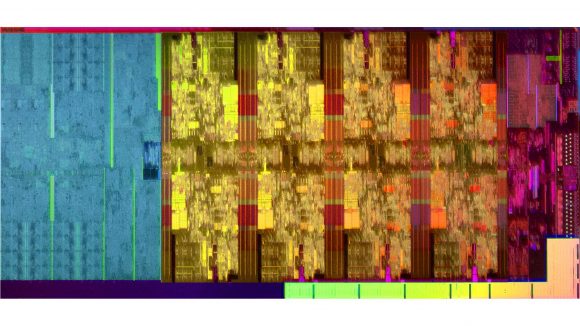 There is at least one benefit of these graphics defunct CPUs: you won’t end up accidentally running your PC from the integrated graphics. Aside from that, these chips will maybe offer some stock relief, potentially alleviating the need for stock-related price increases by retailers.

Supposedly these chips will fall into the hands of OEMs most of all, bundled into pre-built systems.

Intel’s 9th Gen chips will be facing off with AMD’s 3rd Gen Ryzen chips set to launch later this year. The red team’s eight-core engineering sample made an appearance at CES already, proving it has what it takes to defeat Intel’s i9 9900K with greater power efficiency.

Intel is planning a Q1 release for its latest 9th Gen processors, although no exact date is given. When that time comes, keep an eye out for the “discrete graphics required” branding across the box to distinguish these chips from their graphics-capable counterparts.