Intel’s Cryogen Wafer Prober is a vital step in making quantum computing mainstream. Working with its partners, Bluefors and Afore, Intel has created a silicon wafer checking machine capable of operating at the sorts of frighteningly low temperatures necessary for the operating of quantum computers. This cryoprober means quantum wafers can be validated in the lab to see if the relevant qubits are functioning properly, and doing this before they’re fully built into a complete machine saves a huge amount of time and makes volume production of quantum processors genuinely viable.

The Cryogenic Wafer Prober operates with 300mm wafers and because the switching characteristics of spin qubits has to be measured at temperatures colder than space it has to function at just a couple of kelvins. Checking traditional binary transistors is a piece of cake by comparison…

Currently the method of checking the functionality of a quantum processor can take months, and that happens well after manufacturing. Standard silicon transistors, however, can be checked in hours on a 300mm wafer and that’s the speed Intel wants to get towards with the cryprober.

The new Intel Cryogenic Wafer Prober has been demonstrated for the first time on a 300mm wafer sporting more than 100 qubits, measuring the turn-on characteristics across the full wafer.

“Intel has worked with Bluefors and Afore,” says Jim Clarke, director of Quantum Hardware at Intel, “to combine our expertise and build a fast, electrical characterization tool that can operate in the quantum regime. We hope that by designing this tool, the industry can use it to accelerate the progress of quantum computing.” 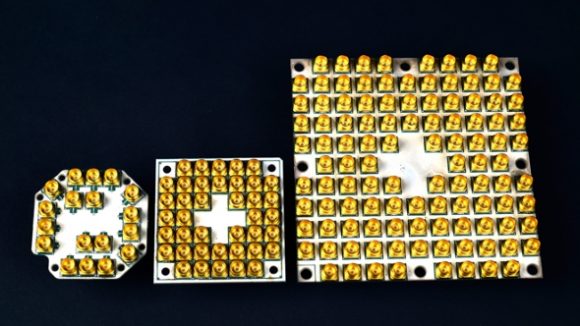 By being able to check the qubits at a manufacturing level any errors can be quickly fed back into the production line, making the rapid iteration and volume manufacturing of a quantum processor a reality arguably for the first time. It was during the development of its own silicon-based quantum processor, code-named Tangle Lake, it became clear that a quantum testing tool was vital for the process.

“Building on our expertise in transistor process technology,” says Clarke, “we saw the need to create a 300mm high-volume fabrication and test line for semiconductor spin qubits. We are focused on the manufacturability and scaling issues for quantum, and a fast feedback through the cryoprober allows Intel to accelerate our scientific learning.”

With this sort of checking machine Intel is moving quantum computing beyond the lab and closer to the mainstream. We are still years away from actually settling on exactly what a quantum computer should be, with everyone from Intel to Google to Microsoft all working on their own machines and standards.

And whoever actually comes out of the melange with /the/ gold standard of quantum processing will be the big winners of the next generation of computing. Though if they’re still based on silicon Intel cryoprober will mean it’s could win whatever.