Sitting on a Skylake CPU and worried you’re going to be off the pace when Kaby Lake rolls around? Well, I wouldn’t worry your pretty little heads too much if my early testing with our own Core i7 7700K is anything to go by. Running it in our standard Z170 Asus motherboard it doesn’t really offer anything over the current Core i7 6700K.

I bumped into a guy in the park the other day. He was wearing a dirty mac and a battered fedora pulled low over his face. I was filled with dread to see him pull back the folds of his coat, though that was quickly replaced by a mix of wonder and disgust when I realised underneath he was painted head to toe in thick blue paint.

Before he flew off with his equally Smurfy buddies he dropped a tiny bit of silicon into my hand. And lo it was the new Intel Core i7 7700K. A genuine Christmas miracle, guv’nor.

Since that chance meeting I’ve been putting the new Kaby Lake K-series i7 through it’s paces in our fully updated Asus Z170 motherboard and the results have been… well… sort of disappointing.

I mean, they’re disappointing if you were hoping the newly optimised 14nm Kaby Lake Core architecture would offer anything tangibly different from the current Skylake generation of chips, but if you’re sitting on a current gen Core i7 I imagine the results are probably quite pleasing.

You’ll see from the benchmark results below that even with the two chips, the Core i7 7700K and Core i7 6700K running at their stock speeds there’s precious little extra performance to be gained by the Kaby Lake chip. And when they’re both running at the 7700K’s 4.5GHz peak Turbo clockspeed there is nothing between them whether we’re talking straight CPU tests or graphics/gaming benchmarks.

There is one little beacon of hope in these early tests and that’s with the temperature and power performance. The Kaby Lake chip runs hotter than the Skylake i7 when they’re both running at stock speeds, but when the 6700K is pushed to the 7700K’s 4.5GHz frequency that switches around.

The Intel Core i7 7700K is also a slightly better overclocker, as we were hoping, but didn’t quite manage a completely stable 5GHz. The 6700K sticks at the 4.8GHz mark and we got the 7700K running stable at 4.9GHz, though obviously that 100MHz speed differential doesn’t really translate into any tangible performance difference.

I did get the Kaby Lake i7 to pass some of our benchmarking tests at 5GHz, but for the really intensive X264 video encoding test it consistently fell over. It was also regularly topping 91°C, especially when I tried putting a little more voltage through it to keep things rolling on. 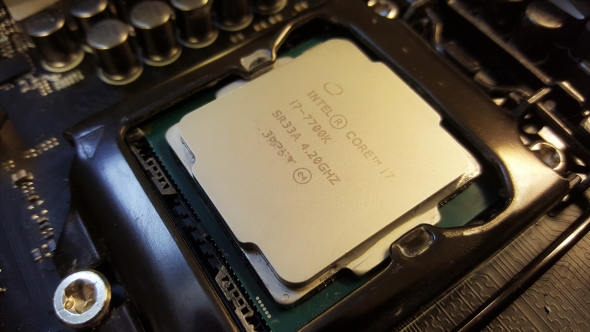 I can’t help feel a little disappointed in just how little difference there is in my, admittedly very early, benchmarking tests. The Core i7 7700K is really going to struggle to justify itself if these results ring true in my final testing.

We can only hope the new Z270 chipset makes up for that and brings us something more positive when the final Kaby Lake launch goes down next year. And, who knows, maybe the Core i5 7600K will turn out to be an absolute silicon triumph. Fingers crossed, eh?

Original story October 4, 2016: AGeekbench 4.0.0 benchmarkhas appeared online showing the performance of the top-endKaby Lake CPU, the Intel Core i7 7700K. Set in a Gigabyte Z170XP-SLI motherboard, the quad-core processor is shown performing at the same level as a six-core i7 6800K.

The Geekbench test uses a bunch of different benchmarks to deliver a performance score for your processor, using integer and floating point workloads as well as memory performance tests to put together both single and multi-threaded index scores. At the moment the Core i7 6700K sits atop the single core performance charts, but if this Kaby Lake test proves reliable and repeatable the i7 7700K will be considerably quicker than its older sibling. 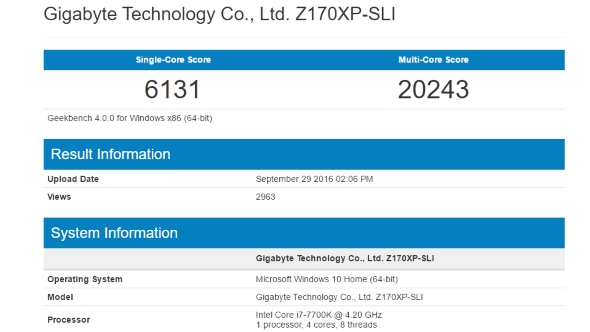 But it’s not necessarily the performance of the upcoming Kaby Lake processor against the Skylake i7 chips it’s replacing which is the most interesting. The Broadwell-E i7 6800K chip is a six-core, 12-thread CPU and yet the 7700K is still able to post the same sort of multi-threaded performance in the Geekbench tests. Realistically that’s because the Kaby Lake processor is clocked so much higher – by a full 800MHz – on a clock-for-clock basis then the 6800K is still going to have the win.

This does though show the potential for the new Kaby Lake CPU refresh, though we’re going to have to wait for CES in January 2017 to get the full release of the new processors. And if they follow the last refresh – the Haswell-era Devil’s Canyon chips – then the Kaby Lake CPUs are going to take advantage of a mature production process to deliver super-high overclocking performance.

The other interesting thing to come from the Geekbench result is that the testing was carried out on a Z170 motherboard, not the new Z270 chipset which is set to accompany the new CPU range’s launch. MSI have recently stated that their Z170 motherboards will only need a new BIOS update to provide support for the next generation of Intel processors, and this result seems to suggest the same for Gigabyte too.

So why would you want to make the move to a Z270 motherboard? The new 200-series chipsets aren’t going to be vastly different from the current 100-series boards, but will provide more PCIe 3.0 lanes – up to 24 from 20 – as well as support for Intel’s advanced new Optane SSD and memory technology. 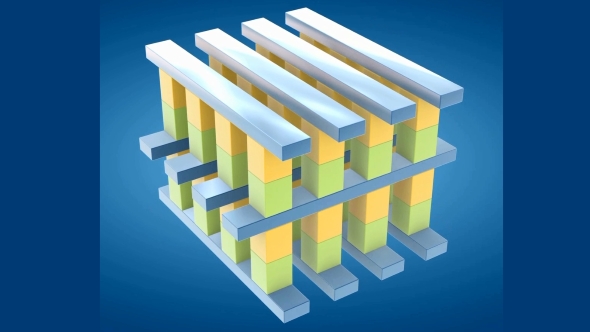 Optane uses the 3D XPoint technology jointly created by Micron and Intel, which is designed to offer a step-change in memory performance over the traditional NAND memory used in RAM and SSDs. It’s potentially 1,000x faster, with 1,000x the endurance levels and 10x denser than conventional NAND-based memory. Intel reckons it will have the first Optane SSDs out before the end of the year, with volume shipping to follow later on in 2017.